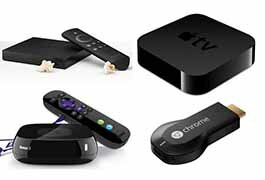 By 2017 there will be twice as many devices connected to the Internet in the United States than there are Internet households, according to new data from The NPD Group.

The number of connected devices — which include video game consoles, streaming media players, Blu-ray Disc players and televisions — are projected to grow more than 100% over the next three years. The projection is based on quarterly surveys conducted among more than 5,000 U.S. consumers, age 18 and older.

Driving forces in the connected market include TVs and streaming media players such as Roku and Google Chromecast. Devices such as these are expected to represent the majority of the growth in installed and Internet-connected units over the next three years, according to the NPD.

As more connected devices are installed, the rate at which consumers connect Internet-ready TVs is expected to increase from 60% this year to 76% of installed units by 2017. The increased connectivity will be bolstered by hardware upgrades that prompt consumers to connect, increased app programming from TV networks, and improvements to user interfaces.

“The evolution of hardware and digital content distribution is constantly changing the TV-viewing experience,” John Buffone, executive director of NPD Connected Intelligence, said in a statement. “Over the coming years, the consumer’s preferred device for apps on TV will be shaped by the next generation of video game consoles, smart TVs, and a new wave of streaming media players.”

Buffone said that by 2018 the connected market will begin to reach saturation with the proliferation of apps. The majority of homes will have an average of three TVs — two of which will be connected to the Internet via third-party device. A large portion of the connected-TV device market will move from being for first-time connected-TV households to consumers entering a device upgrade cycle.

“Due to the rapid growth of connected TV devices, now is the time to establish consumer loyalty,” Buffone said. “Millions of viewers are trying new devices and apps, deciding which, if any, will become an indispensable part of their TV time.”