Time of My Life (DVD Review) 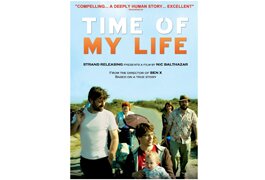 Best buddies Mario (Koen De Graeve) and Thomas (Geert Van Rampelberg) share everything from laughs to lovers, and their bond is undeniable from the start of the film. Soon, however, their friendship is stretched to heartwrenching lengths when Mario is diagnosed with multiple sclerosis.

Based on a true story, Time of My Life follows Mario Verstraete on his quest to legalize euthanasia in Belgium — a task at which he and “Dying With Dignity” proponents succeed. Eventually, he becomes the first in that nation’s history to partake of the controversial legislation.

Mario’s friends and family find it tough to understand and support the idea of him willfully ending his life when he feels the physical effects of living with MS become too great to bear. While they don’t see eye to eye on Mario’s wishes, they lovingly stick by him as the years go by, and he continually deteriorates.

A bright, easygoing person, Mario takes the good with the bad. He makes light of his condition with hilarious quips and even has fun pushing his son, Milan (Felix Maesschalck), on his motorized scooter. But as his health worsens, Mario comes to a breaking point and contemplates ending his life himself, without the euthanasia.

Time of My Life is a commentary on humankind’s life cycle in general, as Mario essentially is reduced to infancy, requiring the aid of others to complete the simplest of tasks. In one poignant scene, Mario sits crouched on his mother’s lap, sobbing about what his life has become.

Viewers will feel for Mario, and the character’s vulnerability is a testament to the flawless execution by De Graeve, who reportedly lost 20 pounds for the role. The film is thought-provoking and endearing — a powerful reminder of the frailty of life.