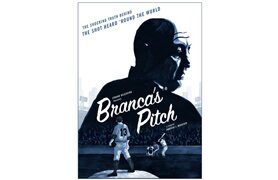 I remember during the Clinton impeachment proceedings when several hacks in the House actually made the claim that “this isn’t about sex” — only to spur comments from another no small number of savvy political wags noting that when someone says something isn’t about sex, that’s the first thing it’s all about. There’s a brief moment in this unusual baseball documentary that brings this earlier episode to mind. It’s when its subject — former Brooklyn Dodgers relief pitcher Ralph Branca — says that the folkloric walk-off home run off him by New York Giants third baseman Bobby Thomson in 1951 didn’t bother him. Well, if that were true, this tight 87-minute package probably wouldn’t exist, even if it ultimately does appear that Branca, now 87, has come to terms with his fate.

Another claim made here, and it’s likely true, is that eight out of 10 New Yorkers over 70 years of age can tell you exactly what they were doing when Thomson blasted Branca’s one-strike pitch into the left field of the Polo Grounds — this during the bottom the ninth in the third and decisive National League playoff after the Giants came back from a 13½-game mid-August deficit in the standings to tie their rivals. (I know from an unrelated interview I once read that, by golly, Woody Allen remembers.) It is still probably the most famous home run in baseball history, one I first learned about in the old 1956 Columbia LP The Thrill of Sports — which was a kind of sequel to the same label’s classic from the year before — The Greatest Moments in Sports — which is better known. Thrill, which I owned, opened with what I later learned was a re-creation of Branca’s postgame locker room misery — recorded, as we learn in the documentary, at Toots Shor’s famous eatery, at which built-in “crowd sounds” would have been readily available.

This is all pretty wild, but the standout archival mind-melters here are subsequent kinescopes of Branca on TV’s “Concentration” (where he won 17 games) and of him sharing an indescribable singing duet with Thomson on “The Ed Sullivan Show” (back when it was still called “Toast of the Town”) of “Because of You” — a huge pop hit at the time for Tony Bennett on Columbia and a slightly lesser one for Les Baxter on Capitol. As it turned out, the two players became tentative friends and shared reunion spotlights over the years, as Branca sucked it in and became a smiling sort while all the while wondering how the Giants could have played such sterling September ball (while the Dodgers, feeling the breath of the dragon chasing them), collapsed. Then, much later, came the bombshell from Wall Street Journal reporter Joshua Prager, who’s interviewed here. The Giants, and the evidence is pretty strong, were stealing signs via an elaborate spy-network setup — which doesn’t necessarily slam Thomson (he still had to hit the pitch, even if he knew what was coming) but does suggest that the Giants might have stolen a game or two down the homestretch, without which there wouldn’t have been a playoff.

A team managed by Leo Durocher engaging in subterfuge? I am shocked, shocked.

To be fair, it isn’t right (at least in terms of the documentary) to give Prager a mention before David Ritz — the professional ghostwriter and co-player here we see helping Branca write his autobiography, working out of what looks like a book-lined bunker. Looking like anything but a writer (the bald head, fleshy appearance and tattoos definitely intimidate), baseball lover Ritz and his latest subject seem to hit it off, and what has been promoted as a baseball documentary turns out to be something more: a portrait of what it takes to be a for-hire ghost, a topic I don’t think has ever been pursued much in the movies, if indeed ever before. I’m not talking about using the profession as a plot device the way Roman Polanski’s The Ghost Writer did a few years back but actually showing the give-and-take in the dynamics when a non-writer puts himself in the hands of someone who may or not feel the subject at hand in his marrow.

Shot in black-and-white, which blends nicely with the old newsreel footage, this is a baseball documentary with a slightly skewed approach I wasn’t expecting. It would have been flavorful to include Thomson had director Andrew Muscato been able (or inclined) to secure his participation. But the Giants’ savior died in 2010, which was before or around production time, and there’s evidence that he knew just enough about what had happened to make him less than comfortable with celebrity that was significantly sweeter than what faced one of the most famous goats (a cruel term, I’ve always thought) in sports annals.

New on Disc: 'The Big Parade' and more …