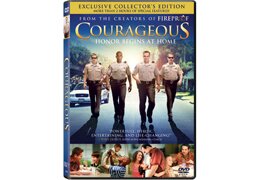 With all the trials that life’s been throwing our way these days, if ever there was a time we needed encouragement, it’s now. When was the last time you saw a movie that impacted you so much that it made you resolve to change your life, for the better?

Well, for my father, a former Marine and a follower of Christ, it was when he saw faith-based drama Courageous, which hit theaters in September 2011. Sony Pictures Home Entertainment released the film Jan. 17 on DVD ($30.99) and Blu-ray Disc ($35.99).

The inspirational film follows four police officers, each in different stages of fatherhood, as they make a pact to maintain a stronger presence within their households. After facing challenges, the men are driven to live lives that honor God and to make love the centerpiece of their relationships with their children and wives.

I see my own dad in star Ken Bevel — also a retired Marine — who plays officer Nathan Hayes. In the gripping opening scene of Courageous, Nathan thwarts a carjacking by risking his life and going after the bad guy. It’s only when the SUV screeches to a halt that we realize why he was so intently trying to get his vehicle back: His baby is in the back seat.

I know my father would have done the same for my brother or me, if put in the same situation. After seeing Courageous, my dad and his friends have pledged to make resolutions to be better men, similar to the ones made in the film.

Courageous has affected me too, however, in a different way. Its title theme song “Courageous,” by Christian rock band Casting Crowns, has provided me with much-needed encouragement while listening to The Fish (KFSH 95.9) on my morning commutes.

In particular, its lyrics resonated with me: “Seek justice/ Love mercy/ Walk humbly with your God” (derived from Micah 6:8), and the stirring plea that lead singer Mark Hall belts out, “Lord, make us courageous.” These are practical affirmations that every believer should strive to embody. It’s something that I’m constantly working on.