Why 'Frozen' Is So Hot 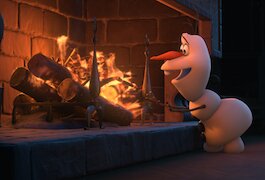 Thus, my neighbor and I, both moms, expected to be particularly wowed. But while we both liked the movie, our enthusiasm didn’t quite match that of our daughters.

This made me ask myself, and my daughters, ‘Why Is Frozen So Hot?”

As a preface, let me just say this was before the film won Oscars for Best Animated Feature and for Best Original Song for “Let It Go.” The tide of praise from the pint-sized set had been building for some time before that.

From the 15-year-old: “I liked that the guy she ended up with wasn’t super hot,” she said. “He’s not like Prince Charming. He’s not a prince; he’s just some guy. He’s just like a clumsy guy that’s cute and adorable. It feels more real because you are more likely to meet a guy that’s like that, than a guy that’s a prince.”

Reluctantly, because she is the older sister after all, my 15-year-old admitted that she liked that whole sisterly love thing as well.

“She gets saved by her sister,” the teenager pointed out.

While “Let It Go” — a blasting ballad of self-realization — was definitely a hit with the girls, their favorite song was “Do You Want to Build a Snowman?” the song that outlined the longing for sisterly connection after the two siblings are separated.

Both got the irony of the song “Love Is an Open Door,” in which the younger sister is taken with a young man and opens her heart after meeting him just once.

In fact, the 15-year-old said her favorite running gag was “You’re getting married to a guy you just met?!”

Why was that so funny?

“Because that’s how it is in every other Disney movie,” my teenager said, helpfully. “Your only goal in life was to get married. I’d like to get to the point where the regular princess movies are multi-cultural, and there isn’t a guy.”

There isn’t a guy!

This may be the first generation of girls not looking for a prince.

But take consolation in the fact that the girls are just looking for “some guy,” a regular guy, a realistic guy, and that may ultimately be the hottest thing of all.