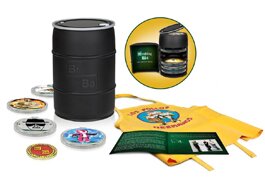 Sony Pictures Home Entertainment rolled out the red carpet treatment for its comprehensive “Breaking Bad” series set last week. Lead star Bryan Cranston showed up along with other talent from the series, including Vince Gilligan, the series creator, to acknowledge the end of an era in their respective careers as well as to promote the release of the gigantic series set.

Before the advent of disc, perhaps most of the reminiscing about a series happened at the wrap party and was lost to time. But Sony, via a feature-length documentary about the final season — allowing each actor to say a final goodbye — has given one of the seminal TV series of this era a truly proper sendoff.

I’ve written previously about the historical value of disc as a medium, and in the TV realm, disc offers a particular service when it documents the entire work of a series, almost as if it were an extended feature film. In the documentary, “Breaking Bad” is compared to feature Westerns of yesteryear. Like classics such as Stagecoach and The Searchers, “Breaking Bad” is an American Western, albeit a modern one, in which bad guys and good guys fight it out and in the end it is unclear what “good” and “bad” mean anymore. Another contemporary series, “The Walking Dead,” is exploring similar themes, and when it comes out in a complete series set, no doubt it will delight both rabid TV fans and media historians.

Like extended Westerns, both series may best be remembered as a whole, rather than piecemeal.

It’s been said recently that television as a medium is garnering increased creative attention. I recently talked to an aspiring writer who, rather than looking to write the next big feature film, was focusing his attention on writing for television because it afforded a better creative outlet.

While streaming episodes may be a great way to initially consume this flourishing creative format, it will be on disc, in full series sets, that these series will be preserved.