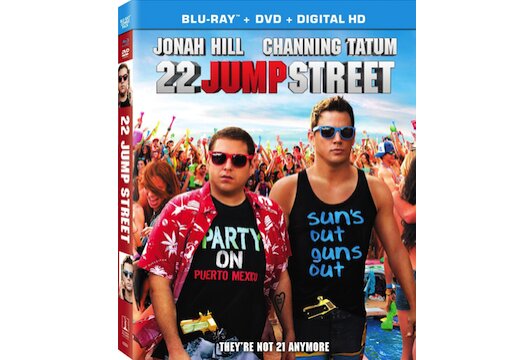 Crappy sequels to hit comedies are a dime a dozen. That’s why, with tongues planted firmly in their cheeks, the filmmakers behind the 21 Jump Street sequel take aim at nothing less than Hollywood’s franchise mentality.

Jonah Hill and Channing Tatum return as officers Schmidt and Jenko, who try to return to being regular cops after busting a high school drug ring in the first movie. And when that goes horribly wrong, they are told their mistake was trying to do something different than what worked before. And thus, they are assigned a drug case at a local college and told to do the exact same thing they did before. Only now the department has more money to help them do it (setting up a new HQ across the street at 22 Jump St., while 23 Jump St. is under construction).

So, with a chance to relive their college years (or, in Jenko’s case, to be the first person in his family to pretend to go to college), the duo gets too caught up in their assignment trying to fit in at school rather than solve the case, just like in the first movie. Except, of course, for the slew of new gags that ensue. Jenko wants to play football. Schmidt suffers an emotional crisis and runs afoul of his captain (Ice Cube). It all leads to a wild romp at a Spring Break resort to cap off a send-up of practically college stereotype ever.

What makes 22 Jump Street so damn funny is the way every character knows exactly what kind of movie they’re in, and they just don’t care how dumb it is. It helps to have someone like Nick Offerman on hand reprising his role as the deputy police chief, since his droll, authoritative style gives him a unique ability to lend believability to the absurdity of it all and perfectly sets the tone for what follows. Then, to top it off, the film delivers some truly inspired end credits that obliterate the concept of gimmicky sequels and running franchises into the ground.

And if that’s not enough, there are about 40 minutes of deleted and extended scenes that actually succeed in filling in some character motivations that were trimmed in the final film. That’s on top of 20 minutes of improv-inspired alternate takes and 50 minutes of behind-the-scenes featurettes in which the filmmakers admit that the main gag of the film is doing exactly what everyone expects them to do as obviously and on-the-nose as possible. But it works.

The commentary, with Tatum, Hill (who co-wrote) and co-directors Phil Lord and Chris Miller, is another fun time, if only for how they recount how all the young people in their lives just wanted to meet co-star (and YouTube sensation) Jimmy Tatro.

For good measure, the Blu-ray also includes a version of the film edited like a cop drama, with all the jokes cut out. It’s 10 minutes long.