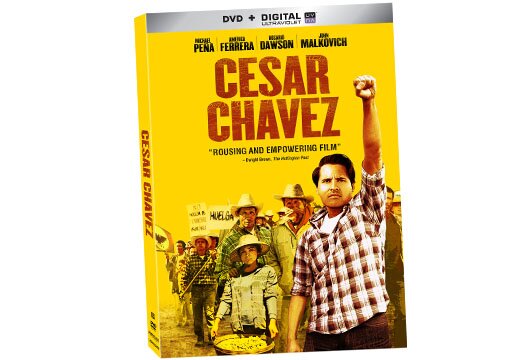 One of the biggest movies this year for Mexican-Americans was Cesar Chavez.

Starring Michael Peña, America Ferrera and Rosario Dawson, the film tells the story of civil rights activist and American farm worker Cesar Chavez and his rise as a labor leader. The film is available on DVD and Blu-ray from Lionsgate for about $20.

I won’t deny that the film failed to accurately portray many elements of the complex history of the United Farm Workers movement. I also won’t disagree all that much with the less-than-stellar reviews from critics and audiences alike.

However, I think it’s important to point out that Cesar Chavez is still a solid movie with a great message for filmmakers to make in highlighting an important Mexican-American leader AND portraying him by a talented Mexican-American actor. As with many biopics or historical movies, I hope that the movie encourages audiences to go out and research the real people and the real stories. In this Google age, a lot of information is easily accessible with a few keyboard strokes.

Of course, it would have been even easier if the home video releases included some sort of documentary or even a few featurettes about the real Cesar Chavez and Dolores Huerta.

But I do have to commend distributors Lionsgate and Pantelion and production house Participant Media for the socially conscious efforts to support Chavez’s cause, which sadly is still a struggle for farm workers.

As reported earlier in an article by my colleague Chris Tribbey, Participant Media and the Equitable Food Initiative (EFI) launched a new food label trust-mark that certifies produce is “responsibly grown and farmworker assured.” This will help shoppers identify, and hopefully purchase, equitably sourced food.

During the film’s theatrical run, Participant also gathered more than 30,000 signatures on TakePart.com in support of EFI’s efforts to provide training and fair wages to farmworkers and implement safe food practices. And among the trailers on the DVD is a PSA for farm worker safety standards and supporting the cause at Takepart.com/chavez. The TakePart petition is now at 34,016 of its 60,000 goal. I encourage you to visit the site and learn more about how you can take action and learn about the Chavez’s work, which is still being carried on today.