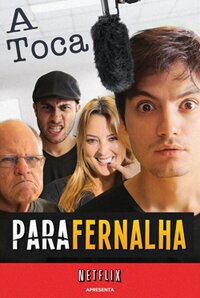 If you read my July 8 blog, Latinos Love Netflix, you may have caught my suggestion at the end for Netflix to create original Spanish-Language content. Well, I apparently (and unknowingly) was reading their minds.

Greenfield included a link to an from Jornal O Globo with more info, if you can read Portuguese. According to O Globo (with some help from freetranslation.com), I learned the show is called “A Toca” (The Touch) and is a comedy comprised of skits, based on “The Office.”

The show is written and produced by Felipe Neto, a popular comedian on YouTube from the channel Parafernalha.

Neto told O Globo he had complete creative freedom — sounds similar to what “The Arrested Development” and “House of Cards” producers said of Netflix — and the program touches on subjects traditionally taboo on TV, similar to Neto’s YouTube show “Não Faz Sentido.”

“A Toca” is new content adapted from Parafernalha, and according to Andrew Wallenstein’s from Variety, the show appears exclusively on Netflix, which licenses the series.

The program debuted Aug. 9 with three 30-minute episodes on Netflix, which has been available in Brazil for two years now.

Unlike Netflix’s other shows, "A Toca" will be available only in Brazil. Jonathan Friedland, chief communications officer for Netflix, told O Globo that the show is “very Brazilian” and that comedies don’t translate to other countries as well as dramas do. He pointed to “Arrested Development,” which is doing great in the United States, United Kingdom and Canada, but not so well in Latin America.

“A Tocar” marks Netflix’s first original programming outside of the United States. I think it’s pretty cool the service chose a Latin American country for this milestone.