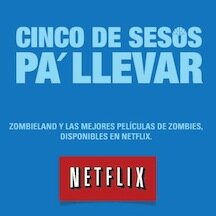 For years and years … and years, we’ve all been hearing about the rising power of Latinos. This isn’t new. But what is new is the recent report from Centris Marketing Science, which is yet more evidence of our rising power in entertainment.

The U.S. Communications and Entertainment Insights report shows that Latinos are watching more videos online than the rest of the U.S. population. But the finding that I found interesting was this: Thirty-three percent of Latino households subscribe to Netflix, versus 25% of U.S. households overall.

Netflix doesn’t have a lot of “Latino” movies or even that many Spanish-language films. And what the service has is filed under regular genres or foreign films. You have to really dig to find them. The company has even fewer films dubbed in Spanish, and it’s mostly animated movies. And as far as I know, there haven’t been any major marketing campaigns aimed at U.S. Latinos.

Some might think Netflix is leaving money on the table by not marketing to Latinos in the United States, which historically overindex in entertainment consumption in general. But I tend to think Netflix would be spending money frivolously if they did do a huge campaign. Blockbuster has long had their Latino sections and marketing, but did they ever work out that well? It’s pretty well known that Latinos prefer to watch the mainstream blockbusters.

While I do wish Netflix offered more Spanish-language movies and Latino fare, I don’t think a move like this would necessarily boost Latino subscribership. Latino films, if well made, would appeal to anyone, just as the good non-Latino films appeal to Latinos.

And speaking of well-made content, maybe Netflix in the future will create original Spanish-language content, which could also appeal to their subscribers in Latin American countries. With Netflix trying to compete with HBO, it would be nice to see the company compete with HBO in its HBO Latino programming such as “Epitafios” and “Capadocia” — both of which I absolutely loved and own on DVD.