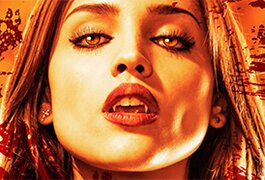 Each episode of the show, which is based on the 1996 movie that Rodriguez directed and Quentin Tarantino wrote, will be available the day after broadcast starting March 12.

The show centers on bank robber brothers Seth (D.J. Cotrona) and Richie Gecko (Zane Holtz), who are wanted by the FBI and Texas Rangers Earl McGraw (Don Johnson) and Freddie Gonzalez (Jesse Garcia). While on the run to Mexico, the Geckos encounter a family, whom they take hostage, using their family RV to cross the border. All hell breaks loose when the group detours to a strip club occupied by vampires.

Rodriguez is among the executive producers of the series, which expands on the film, adding new characters and backstories, and developing the Mesoamerican mythology behind the creatures inside the club.

Entertainment One Television holds the domestic DVD and digital rights for the show and will likely release it on disc at a later date.

“From Dusk Till Dawn: The Series” is a production from El Rey Network, a new 24-hour English-language network co-founded by Rodriguez, who curates the channel along with his artistic collective. Not surprisingly, El Rey’s content features original dramas, grindhouse content, cult classic actioners, and horror and sci-fi movies and shows.

According to its boilerplate info on the press release, “the network will unite the most culturally diverse generation in history through fearless, badass and original content that awakens the renegade in everyone.”

With that description, who wouldn’t want to watch any show on this network?