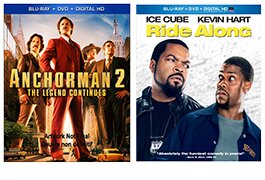 Best Buy also offered $7 off the e-book of The Book Thief with the purchase of the new Blu-ray of the film version, available from Fox.

Target, which seemed to quickly sell out of its exclusive deluxe Blu-ray editions of The Hunger Games: Catching Fire, altered its promotion to give buyers of the film a free six-pack of Pop-Secret popcorn.

For Universal’s new animated film Barbie: The Pearl Princess, Target offered a free Barbie mini doll with the purchase of the film or the transforming Pearl Princess doll.

Walmart had exclusive availability of the Anchor Bay family film Against the Wild.