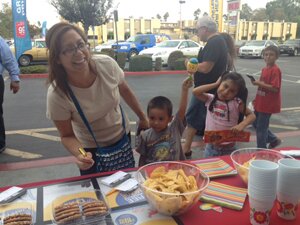 Last month Blockbuster launched its Cine Latino movie section, as you may have already read from my colleague Erik Gruenwedel’s report. For all the details, read his story, but in a nutshell: Blockbuster added these Cine Latino sections in 200 of its 900 U.S. stores, with more than 60 Latino new and catalog movies for all ages. The launch was timed with National Hispanic Heritage Month (Sept. 15 - Oct. 15) and included store celebrations as well as a Block Party Sweepstakes, which closed last week. The available films include Los Inadaptados (2011, Mexico), 2033: Apocalipsis Futuro (2009, Mexico), Pastorela (2011, Mexico), A Paradise Under the Stars (2000, Spain), Manuela y Manuel (2007, Puerto Rico) and Bitter Sugar (1996, Cuba).

Blockbuster said it plans to revise the collection on an ongoing basis, based on feedback and demand from customers.

This isn’t the first time Blockbuster has reached out to Latinos. In November 2002, the retail chain launched its Latino initiative in 700 of its then 5,670 stores. At the time, the company expanded its merchandising, added bilingual marketing and in-store signage, and beefed up its inventory of films aimed at the Latino communities it was serving.

And Latino consumers seemed to have taken notice then. Keep in mind, this was before Redbox and when Netflix was still a few years old. But our in-house research at the time showed that 56% of Latinos who rented DVDs (again, before there was Blu-ray), rented at Blockbuster.

I wondered what happened to those initiatives and why they faded out. Blockbuster seems to be in the same boat. A company spokesperson admitted they unfortunately “don't have access to valuable institutional knowledge” of that program, which is understandable considering the chain’s bankruptcy and sale to Dish. Still a shame.

“While we have historically stocked some Latino content, right now we are intent on creating a customer-focused entertainment destination to meet the needs of the local Latino communities,” the spokesperson told me about Cine Latino.

To be honest, I was at first a little bemused by this initiative, wondering just how in touch Blockbuster is with Latinos. I’d never heard of many of these titles touted, and I wondered how much the average Latino family would be interested in them. As most research shows, Latinos are huge consumers of movies, and they mostly prefer to see the regular blockbusters that any American would — they just might need Spanish subtitles or dubs. However, a lot of us Latinos in the United States do speak English.

But then as I kept thinking, I realized Blockbuster does get us, not only as consumers but also as members of the movie industry.

First of all, my hat goes off to Blockbuster for recognizing National Hispanic Heritage Month, which often goes unnoticed by non-Latinos and has been less and less remembered in our industry.

Second, they had a sweepstakes for a block party. How often do you see block parties in Latino neighborhoods? (For those not in the know, the answer is: pretty frequently.) Yes, we like to party, and we like to have big parties. Blockbuster apparently knows this.

And third, besides product, how else do you make a consumer feel welcome? Good, tailored customer service. A Blockbuster spokesperson told me the company is hiring all bilingual employees in their Latino stores. So even if your abuela is asking about the new “Espider-Man” movie, the clerk will be able to answer her in a language she’s most comfortable speaking.

Now, let me get back to their selection of films. I, at first, wanted to see some recognizable titles, directors or actors. But I quickly turned my disappointment around when I realized I had just learned about a new batch of Latino films I was unfamiliar with and would like to see. Most consumers immediately know Pedro Almodóvar and Gael García Bernal and their films, but not so much the talented directors Leon Ichaso or Jorge Ramírez Suárez.

So not only is Blockbuster reaching the Latino consumer with the mainstream hits already in stock, but the company also is informing us of what else is out there that we might not know about. In addition, they are helping highlight Latino talent in films, which is something that Latinos in the business could always use some help with.

A Blockbuster spokesperson told me, “We selected the most popular films that also had English subtitles.” Again, the company is going beyond serving the Spanish-speaking Latinos. They’re also reaching out to non-Spanish speaking Latinos as well as non-Latinos who might be interested in Latino cinema. What a better all-around celebration of Latino culture for everyone.

So thank you, Blockbuster, for your efforts. I hope this initiative takes off and sticks. If the pictures from this Sept. 22 celebration in Canoga Park, Calif., are any indication (pictured above), it seems there are some very happy customers.