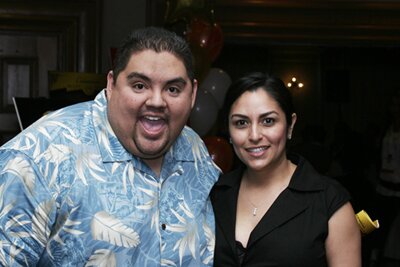 In case you missed Gabriel Iglesias’s show “Stand-Up Revolution” on Comedy Central, Paramount has you covered with the recent two-DVD release. And I urge you to check it out.

The hilarious Stand-Up Revolution DVD features all seven episodes of the show starring Gabriel. Read more about the details in my review.

I’d like to remind readers that Home Media Magazine has been aware of Gabriel, also known as Fluffy, for several years already. We first met him when he came to our Latino DVD Conference in 2007, as a then-rising comedian. He was funny then, and, I think, those in attendance would agree. (The picture at right of Gabriel and me was taken there.)

Now, Latinos, don’t hate me for saying this, but I like that Gabriel didn’t make “Stand-Up Revolution” a “Latino comedy” show. That’s not to say anyone is denying their culture here, but there’s just no self-segregation. Instead, Gabriel has become just as mainstream as any other Comedy Central comic — and he has done it while maintaining his authentic and robust Mexican sabor. Orale, Gabriel!

If anything, Gabriel features comedians who are as wonderfully diverse as his house band, Ozomatli. Having watched the episodes all together, I could see how we are all more alike than different. And isn’t the education of each others’ cultures toward the goal of unity the point? Maybe I’m reading too much into this, but Gabriel made quite a statement choosing Phoenix as the location to shoot his show. It came about after immigration officers stopped his tour bus at a checkpoint there and searched everyone on board (all Mexicans) except for the bus driver (a white man).

Another cool little thing to me is the Ozomatli video included for the song “Hey It’s Fluffy,” which was undoubtedly shot in Long Beach, where Gabriel lives — and where I live too. It made me smile to see Wilson High School in the background, which is right around the corner from where I live, as well as El Sol Bakery, located in my old neighborhood where I used to get my pan dulce.