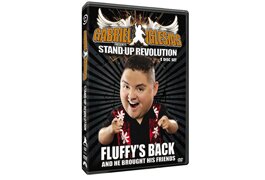 In this latest DVD from Gabriel Iglesias, the funnyman known as Fluffy stars in the Comedy Central show “Stand-Up Revolution.”

The show is shot in Phoenix, a location chosen in response to Iglesias and his tour bus passengers being harassed there during a prior tour. With that in mind, many of the comics presented are Latino, including Rick Gutierrez, Dillon Garcia, Rudy Moreno and Cristela Alonzo, among many others. However, Fluffy also features comedians of all colors and cultures, including Filipino (Edwin San Juan), black (Thea Vidale, Tommy Chunn), Indian (Paul Varghese), Native American (Larry Omaha) and Iranian (Maz Jobrani), making this not a Latino comedy show, but a truly American comedy show — with an undisputed Latino flavor. There is a little Spanish spoken, which isn’t always translated, but that shouldn’t turn off the Spanish-speaking impaired.

Iglesias has a way of drawing in the live audience, making inside jokes that sometimes don’t make sense until you see the outtakes. Watching everything on disc also makes the television audience feel like one of Iglesias’ insiders too.

For those who have seen these shows when they recently aired on television, there’s still much to enjoy on these discs that present the episodes in their extended, unrated form.

The disc also contains Ozomatli’s music video for the song “Hey It’s Fluffy” that the band wrote for Iglesias.

Also included are outtakes and behind-the-scenes footage. With a bunch of comedians, you can image the impromptu hilarity that happens off camera.