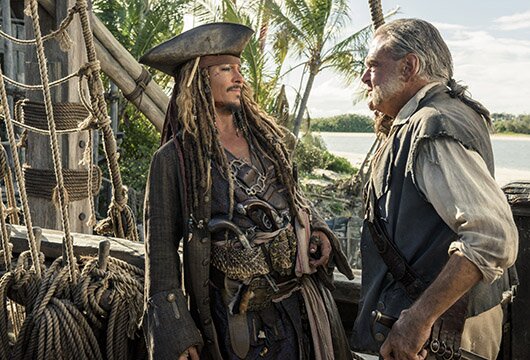 Pirates of the Caribbean: Dead Men Tell No Tales

Walt Disney Studios' Pirates of the Caribbean: Dead Men Tell No Tales, the fifth film in the successful swashbuckler franchise, remained at No. 1 for the second week on the national home video sales charts the week ended Oct. 14.

The film, like its predecessors an offshoot of the “Pirates of the Caribbean” ride at the Disneyland theme park, withstood a strong challenge from Sony Pictures’ Baby Driver, the critically hailed action crime film from writer-director Edgar Wright. The film, which earned $107.8 million in U.S. theaters, debuted at No. 2 on both the NPD VideoScan First Alert sales chart, which tracks combined DVD and Blu-ray Disc unit sales, and the dedicated Blu-ray Disc sales chart.

According to VideoScan, Baby Driver sold 84% as many units its first week in stores as Pirates did in its second week.

Warner’s Wonder Woman remained at No. 3 for the second week on both charts, while the upcoming Halloween holiday kept demand high for 1993’s Hocus Pocus, which finished the week at No. 4 on the overall disc sales chart (and No. 5 on the Blu-ray Disc sales chart).

Rounding out the top five on the overall disc sales chart was Paramount’s Transformers: The Last Knight, which slipped three notches from No. 2 the prior week. It was No. 4 on the Blu-ray chart, also down from No. 2. The film had debuted at No. 1.

VideoScan reported that Baby Driver generated 68% of its first-week sales from Blu-ray Disc, and 13% from Ultra HD Blu-ray Disc.

On Home Media Magazine’s rental chart for the week ended Oct. 15, Baby Driver debuted at No. 1, while Universal Pictures’ 2017 remake of The Mummy soared to No. 2 now that its month-long holdback from Redbox is over.

Pirates of the Caribbean: Dead Men Tell No Tales remained at No. 3 for the second week.

Wonder Woman, the prior week’s top rental, slipped to No. 4, while Transformers: The Last Knight fell to No. 5 from No. 2 the previous week.