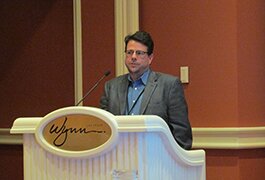 LAS VEGAS — Fret not, home entertainment industry: disc isn’t dead yet, and digital is more than making up for declining DVD sales.

That was the message delivered April 9 by Michael Arrington, senior analyst with research firm IHS, during the Ultra HD Physical and Digital Media Conference at the NAB Show.

From a 2004 high of $22 billion in 2004, the physical disc market will dip below $10 billion in 2015, Arrington said. But consumer spending in the home entertainment industry overall will hit an all-time high of $30 billion-plus by 2017, with digital subscription and premium channel revenues seeing the biggest gains in share.

Currently, 35% of all content purchased across formats is bought in high-def. IHS expects that number to hit 60% by 2017.

“The home entertainment business is stabilizing,” Arrington said. “And the curves may look scary, but physical media will still be around. We have plenty of opportunity to put content on disc.”

Despite “all the problems with the rollout of Blu-ray Disc,” Arrington noted that Blu-ray sales accounted for 50% of home entertainment revenue for titles with a box office performance of $100 million or more. Paramount Home Media Distribution’s Star Trek Into Darkness saw the largest Blu-ray-DVD split, 75%-25%, with Blu-ray sales of the title bringing in an estimated $54 million. Universal Pictures Home Entertainment’s Despicable Me 2 had the largest Blu-ray revenue take ($76 million).

“The combo pack SKUs are really carrying Blu-ray,” Arrington said, noting that 90% of films that took in $25 million or more at the box office in 2013 were released as a combo pack.

Arrington also pointed out the practical reasons disc isn’t going anywhere anytime soon: Home hardware storage and bandwidth aren’t nearly where they need to be in order to supplant Blu-ray.

“There are a lot of benefits to physical that can’t be matched by digital,” he said. “And people do just like to have [content] in their hands.”