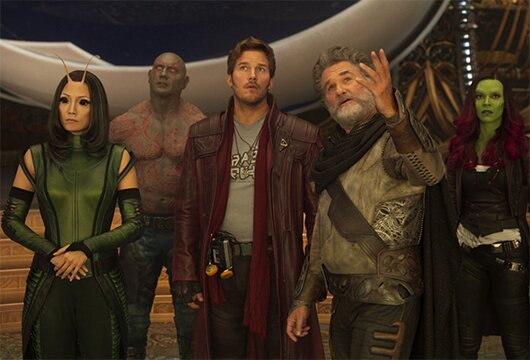 Guardians of the Galaxy Vol. 2

The Marvel mega-hit Guardians of the Galaxy Vol. 2 remained No. 1 on both charts for the second consecutive week.

And Disney’s “Signature Collection” release of The Lion King debuted at No. 2 on both charts. The 1994 animated classic has a long track record of success on home video; upon its initial release more than two decades ago, it sold more than 26 million VHS videocassettes to become the biggest home video seller ever.

Paramount's Baywatch, based on the 1990s lifeguard-themed TV show that made a star out of Pamela Anderson, debuted at No. 3 on both charts after earning $58 million in U.S. theaters.

The No. 4 spot, also on both charts, went to 20th Century Fox's Alien: Covenant, which slipped from No. 2 the prior week. The film, with a domestic gross of $74.3 million, had bowed at No. 1 a week before that.

Warner's Batman and Harley Quinn, a direct-to-video animated movie that is the 30th entry in the "DC Universe" franchise, debuted at No. 5 on both charts.

On Home Media Magazine's rental chart for the week ended Sept. 3, Baywatch debuted at No. 1. Guardians of the Galaxy Vol. 2 rose a spot to No. 2, while Fox's Snatched dropped a spot to No. 3.

The previous week's top rental, Alien: Covenant, slipped to No. 4, with Warner's King Arthur: Legend of the Sword rounding out the top five.