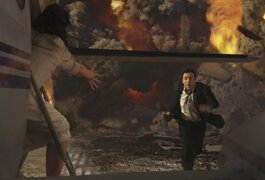 The end-of-the-world drama 2012, from Sony Pictures Home Entertainment, debuted at the top of all three home video charts the week ended March 7. It’s the first DVD release in nearly a month with a box office pedigree of more than $100 million.

The disaster flick, which earned $166.1 million in theaters, trounced fellow newcomer Where the Wild Things Are, from Warner — not surprising, given the family fantasy’s lower box office gross of $73.4 million.

2012 generated 41% of its first-week sales from the Blu-ray Disc version, while for the Wild Things the Blu-ray share was just 28%.

On Home Media Magazine’s rental chart for the week, Where the Wild Things Are debuted at No. 4, right behind Anchor Bay’s Law Abiding Citizen, last week’s top rental, at No. 2, and Universal Studios’ Couples Retreat at No. 3.

A third new release, Walt Disney’s Ponyo, an anime title that took in $15 million during a limited theatrical release late last summer, debuted at No. 3 on both the overall sales chart and the Blu-ray Disc sales chart. Of the film’s total unit sales during the week, 34% came from Blu-ray Disc.

Ponyo debuted at No. 19 on the rental chart.