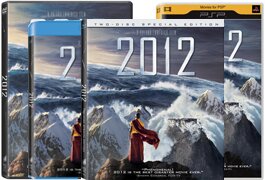 Quality of content aside, 2012 represents exactly what a Blu-ray Disc of a hit theatrical should be. The disc has everything a fan of the movie could want: a commentary with the filmmakers, extensive behind-the-scenes featurettes, a picture-in-picture mode that cannibalizes the featurettes, and several deleted scenes. There’s a music video, and a featurette about the making of the video. And there are fun tie-ins to the concept of the movie.

In this case the movie focuses on a world-ending cataclysm in 2012, which coincides with the end of the Mayan calendar. As such, the Blu-ray has an interactive Mayan calendar that lets users calculate their birthdate in the Mayan system and uncover their horoscope and personality profile. There’s also a “Countdown to the Future” featurette that explores interpretations of Mayan prophecy and the lovely methods by which all society could end. (In the movie itself, however, the Mayan connection is covered in only a couple lines of dialogue.)

The film chronicles the journey of several characters as they outrun the apocalypse in hopes of making it to giant ships that will ferry humanity to its new home. Director Roland Emmerich has upped the ante of the disaster movie, heaping one scene of hopeless destruction upon another. After all the cities he wiped out in Independence Day and The Day After Tomorrow, there’s only so much more he can do.

Some of the fun is swept away by a thick sheen of melodrama involving characters who apparently matter so little the story has no problem killing them off. As it stands, the character most worth following is Chiwetel Ejiofor’s Dr. Helmsley, if only because the actor is such a compelling presence.

Visually, the special effects are too dense with detail for an audience to take in at one sitting, but a little too slick to be completely convincing. These are the kinds of scenes that are likely to be chopped up for stock footage by YouTubers looking to make the next great mash-up.

The film also contains a few effective moments of levity, as well as the threads of some interesting ideas, such as the role of wealth in a post-apocalyptic society. Fans of Emmerich or disaster movies in general may find more to love.