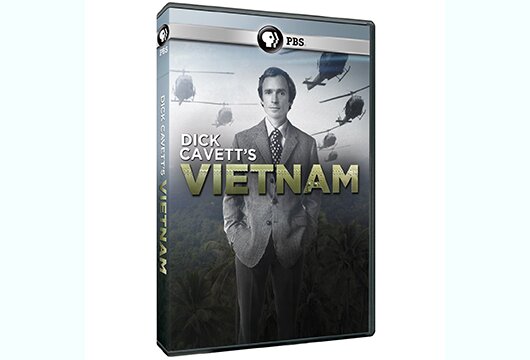 A companion piece to the previously released Dick Cavett’s Watergate, this tantalizingly compelling if frustratingly limited look-back should ideally be viewed first, given all we have to come to learn about the Vietnam-Watergate direct linkage (most recently delineated this very summer in Pulitzer winner Tim Weiner’s One Man Against the World: The Tragedy of Richard Nixon). In great part, the by now generically regarded Watergate horrors were motivated by the Nixon Administration’s reaction to Daniel Ellsberg’s leaking of the Pentagon Papers, which dealt with the fuzzy-headed origins of the Vietnam War. With buggings, ransackings and other dirty tricks ultimately constituting Nixon’s take on the “Big Tent” philosophy, the blatantly illegal mayhem began well before the specific, watershed June 17, 1972, break-in that launches both the book and movie of All the President’s Men.

All of this was eventually front-page material, but in TV terms, you have to remember that this wasn’t that many years after CBS couldn’t even keep one mild tippy-toe into the counterculture (“The Smothers Brothers Comedy Hour”) on the air to placate the demographic that lived outside of Mayberry. Thus, Cavett — though it was a rival network (ABC) and not in prime time. Younger viewers raised on Jon Stewart won’t be that awestruck to hear that there was a TV talk show four decades ago that frequently (though not exclusively) provided a forum for controversial political figures to mingle on the air with, say, Warren Beatty or The Jefferson Airplane (alas, not together). But in 1970 and even after, this kind of thing just didn’t happen — but when it did, Cavett became the one late-night host in history who regularly made the cutting-edge (which didn’t usually watch that much television) tune in, even with Johnny Carson opposite on NBC. The TV viewing I recall more vividly than any from the era was watching Ellsberg the night Cavett gave him the entire program, to Barry Goldwater’s chagrin. And then there was the show where Left-y journalist I.F. Stone — it was the first time I ever saw him — shared the stage with Dustin Hoffman on a night when the audience got a little unruly (I believe Stone called someone a “crypto-fascist”) during those politically turbulent times.

Given the host’s treasure trove of archival material and a relatively short running time that was no doubt dictated by PBS’s time-constraining programming needs, Cavett might have been better off here not giving so much footage to the origins of a war that is not exactly obscure. But then, it’s also a tenet of journalism that you never assume the audience knows as much about the subject as you do. Cavett himself says he barely knew where Vietnam even was until the U.S. was already deep into what Pete Seeger used to call “Big Muddy” — and certainly the Papers’ publication in 1971 (the first leaked excerpt shared the New York Times’ front page with Tricia Nixon’s White House wedding) got a lot of those whose attentions had been consumed by other things to focus or refocus on a higher level.

The broadcast excerpts here are all over the place — but in the good sense. Activist Beatty is politely asked about how a mere actor can have the audacity to challenge Pentagon experts, and he notes, just as journalist David Halberstam did in his all-timer The Best and the Brightest, that it was the experts who got us into the war in the first place. Poetically, then, we get a Cavett interview clip of Halberstam himself, reiterating the famous story of how LBJ knew that the war was finally lost in the country’s hearts and minds when Walter Cronkite publicly stated on the air (before Nixon was even elected) that a stalemate was the likely the best hand the U.S. was holding. But despite the appearance here of Ellsberg, Jane Fonda and Woody Allen (saying he planned to ape Bob Hope by entertaining deserters in Canada), this is no counterculture orgy. Goldwater is here, as is Billy Graham (who got a lot closer than he should have to political bad apples); as is Nixon press secretary Herb Klein, who made a brave appearance (opposite young anti-war veteran John Kerry, in fact) after Cavett extended an invitation to him on the air. Two standout excerpts are from a show devoted to grunts interviewed about their experiences on the field and another featuring onetime Oregon Sen. Wayne Morse, a heavy intellect with heavy eyebrows. Morse was a straight-shooter who registered one of the two “nay” votes against the infamous Gulf of Tonkin resolution, by which LBJ was able to expand the war not long before his ’64 race against presumed (though he was) war-monger Goldwater.

Through it all, we see that Cavett hated to interrupt guests and was in all ways a master of politeness — a kind of anti-Chris Matthews. Around for added context here are Thomas Naftali (who used to head the Nixon Library but was nobody’s whitewashing lackey); Pulitzer-winning historian Fredrik Logevall (who knows a lot about Big Muddy himself); and Vietnam veteran Gen. Wesley Clark, who takes a reasoned, evenhanded historical approach. In the show’s more recently recorded “bridge” interview, Clark opines that when Secretary of Defense Robert McNamara began feeling in his gut that the war had hit a brick wall (not that this was advertised at the time) he should have resigned. The beauty of the by-now expansive DVD literature on ’60s and ’70s political turmoil is the cross-referencing it affords (I probably have a couple hundred such releases myself). So hearing Clark here naturally makes me want to re-see Errol Morris’s deservedly Oscar-winning McNamara portrait The Fog of War, a definitive look at a best-and-brightest who learned that running the Pentagon was nothing like running a Big Three auto company. Too late.