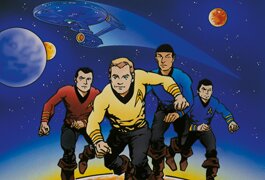 A long-overlooked chapter of the “Star Trek” saga is finally making its way to DVD.

Paramount Home Entertainment will release all 22 episodes of Star Trek: The Animated Series in a $$62.99 four-disc set Nov. 21 (prebook Oct. 10), making it the last “Star Trek” property to receive an official DVD release.

The series originally ran for two seasons on NBC from 1973 to 1974, and featured the stars of the 1966-69 series providing the voices for their well-known characters, including William Shatner and Capt. James T. Kirk and Leonard Nimoy as Spock.

“It was the first time the cast was together after the first show ended,” said producer Lou Scheimer. “The first reading was like a reunion.”

Enter Scheimer, co-founder of Filmation Associates, who got in touch with Roddenberry through a mutual friend.

“I suggested we do a Saturday morning show. He said he'd love to do it,” Scheimer said. “He was involved in ‘ongoing negotiations' with Paramount and they weren't really talking much. The animated show brought them back together.”

As a result, renewed fan interest in “Star Trek” sparked the franchise's revival with Star Trek: The Motion Picture in 1979, and subsequently four more television series and nine more films.

“It revitalized ‘Star Trek,’ Scheimer said. “It showed there was value in it.”

Ironically, the animated show is not considered part of the overall “Star Trek” storyline, at the behest of Roddenberry.

Many of the episodes were written by Roddenberry and the original series writers, and the show won a daytime Emmy in 1975 for Outstanding Children's Series.

“Why we got the Emmy for a kids show, I don't know,” Scheimer said. “It wasn't really a kids show. It was designed to be the same kind of show as the nighttime show, with the same type of messages.”