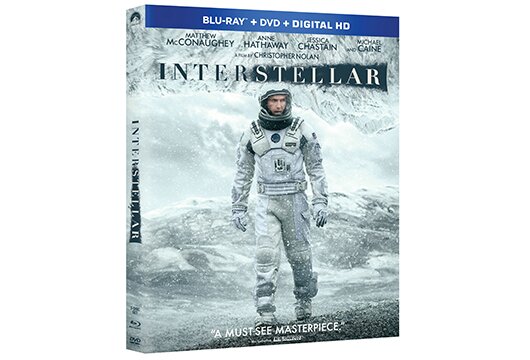 With a reputation for carefully crafted films infused with a unique vision and a penchant for thematic discovery, Christopher Nolan has become one of the most important directors of our time. Certainly, proclamations likening Nolan to a modern Stanley Kubrick (or even Alfred Hitchcock) are not unfounded.

Interstellar, Nolan’s ninth full-length feature in the director’s chair, is his attempt at a science-fiction epic, and it succeeds marvelously.

Nolan’s embrace of scientific verisimilitude, combined with dazzling visual effects and distinctive sci-fi concepts, naturally elicits comparisons between this film and Kubrick’s 2001: A Space Odyssey, in that both feature space explorers on a distant voyage with huge repercussions on the future of human evolution. Both contain machine characters who at times exhibit more emotion than their human counterparts. And both trade on final acts that depend on otherworldly interventions to complete the story. However, while certain parallels are inevitable, both are also unique in their presentations and very much products of their times.

In Interstellar, humanity must contend with an Earth that is dying from an agricultural blight that is destroying the food supply and poisoning the air (by ascribing Earth’s problems to a more generic root cause, rather than a trending cause célèbre such as climate change, Nolan wisely imbues the film with a timeless quality while at the same time avoiding any political polarization that would detract from his primary message).

As governments seek to stifle ambition and curiosity in an effort to encourage the population to take up farming, a dissatisfied former astronaut named Cooper (Matthew McConaughey) stumbles upon the remnants of NASA, who are secretly preparing a series of missions to save humanity by escaping the planet. One involves traveling through a mysterious wormhole to another galaxy to find a new homeworld for mankind. The other involves unlocking the secrets of gravity to facilitate huge spaceships that can transport the population.

Cooper is soon recruited to be the pilot of mission to scout the new galaxy, motivated primarily to help the family he must leave behind, a move resented by his daughter, Murph (played as a girl by Mackenzie Foy and as an adult by Jessica Chastain). The father-daughter relationship is one of the driving forces of the film, as the relativistic nature of space travel sets up a situation that not only allows Cooper in one devastating scene to see his family grow up before his eyes, but also find that he and his daughter are now the same age.

Murph takes on the challenge of solving the gravity equation set upon by NASA’s Professor Brand (Michael Caine), whose own daughter, Amelia (Anne Hathaway), is the lead scientist on Cooper’s mission (and the fact that Cooper and Brand have essentially switched daughters certainly plays into the parallel construction of the Earth and space storylines).

The screenplay, co-written by Nolan with his brother, Jonathan, uses these scenarios to hang an exploration of how the primal human emotion of love can both inspire and complicate our decisions.

Granted, this is likely not a film for everyone. Nolan has attracted his share of overzealous detractors over the years, and Interstellar hasn’t given them much of an excuse to let up, especially with its tendency of being a bit on the nose in providing exposition. Yet the film is bold in its scope, thought-provoking in its presentation and exhilarating in its sense of adventure.

Interstellar is unmistakably Nolan-esque in how it plays with notions of time, a recurring motif in several Nolan films that are characterized by a penchant for non-linear narrative techniques. Memento, The Prestige and Inception are the most famous examples, but it is a style that can be found even in Nolan’s first film, 1999’s small-budget indie Following. Die-hard Nolan enthusiasts might even detect traces of his 1997 short film Doodlebug, about a man whose personal space-time seems to fold against itself (the short is available with Criterion’s Blu-ray of Following).

In addition, sci-fi fans in general could notice similarities between the revelation of the underlying causes of Interstellar’s wormhole with certain plot elements from “Star Trek: Deep Space Nine” and its iconic wormhole. In some respects, Interstellar could almost be interpreted as a deconstruction of the basic premise of that series.

Still, there are enough admirable qualities about Interstellar that it should appeal to a wide variety of viewers.

The Blu-ray contains a separate disc for its exhaustive bonus features, including the film’s trailers and nearly two hours of behind-the-scenes material in the form of 14 “Inside Interstellar” featurettes. They cover every aspect of the production via interviews with the filmmakers, led by the Nolans themselves. It even delves into the film’s most bizarre sequence in its final act, providing some explanations that may or may not make it more palatable to viewers, depending on how accepting they are of the rest of the film.

The only real downside to the featurettes is that there isn’t a “Play All” button.

The Blu-ray’s best bonus is the 50-minute Science of Interstellar television special that originally aired on Science Channel in promotional conjunction with the film’s theatrical release. Narrated effectively by McConaughey, the piece is a straightforward documentary about the scientific theories exploited by the film, offering a nice primer to help viewers better grasp some of the concepts of time and space played with in the movie.