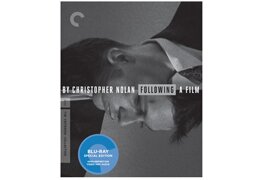 Christopher Nolan certainly made a splash with Memento, riding the wave of critical and mainstream success it brought him to a remarkable filmmaking career. In a little more than a decade, Nolan rose from fan-favorite indie filmmaker to the man who reinvented the superhero film, joining James Cameron as the only directors to guide two movies to more than $1 billion in worldwide box office earnings.

But before he could make Memento and reboot Batman, he demonstrated his talents with Following, a 1998 debut feature rife with glimpses of the bigger things to come.

Shot in black and white on a shoestring budget, Following depicts the plight of an aspiring writer (Jeremy Theobald) whose overwhelming ennui inspires him to start following random people for voyeuristic thrill. This catches the attention of Cobb (Alex Haw), a sharply dressed con man who recruits the young man for a series of burglaries, during which Cobb seems more interested in psychoanalyzing his victims based on their belongings, and stealing their most personal objects instead of anything truly valuable.

Captivated, the young man falls further into Cobb’s world, until he falls for a woman they steal from, and starts following her, too, which further complicates his life when he’s drawn into a blackmail scheme involving her gangster boyfriend.

Driving this fascinating concept, for Nolan, is the notion that people often find themselves isolated even when surrounded by a city of people, and picking out one person in a crowd and wondering about their life that brought them to that point.

The story isn’t necessarily as important as the mood, and Nolan heightens the noirish intrigue by presenting the story out of order. Non-linear narratives would prove to be one of Nolan’s specialties, as evidenced by Memento and The Prestige.

A chronological edit of the film included with the Blu-ray demonstrates that Nolan’s story concept is just as compelling despite the presentation structure. Readily prevalent throughout are motifs of memory and perception, which would become common elements of Nolan’s subsequent films (and the name Cobb would be re-used for Leonardo DiCaprio’s character in Inception; plus, be on the lookout for the Batman logo prominently displayed on an apartment door).

The chronological version was originally included as an extra on a DVD of Following released in 2001 to take advantage of the buzz surrounding Memento (which similarly featured a chronological cut on its DVD). Other extras carried over from that early DVD include a commentary by Nolan and a side-by-side comparison of the shooting script with three scenes from the film.

The Blu-ray sports a new digital transfer that manages to give the film a respectable HD image while preserving the gritty feel of the rough-and-ready 16mm stock used by Nolan. It just has that look of a 1990s indie movie, to which any fan of Kevin Smith’s Clerks can attest.

In fact, Nolan’s budget was so small he had no money for lighting, so he had to make extensive use of natural light, which explains why so many of the characters manage to find themselves standing near open windows.

New to this Blu-ray presentation is a great interview with Nolan conducted in 2010, in which he discusses his process and filmmaking philosophies. There’s also an excellent essay by Scott Foundas that manages to explore Following through the lens of Nolan’s entire career.

Another welcome addition is the inclusion of Nolan’s 1997 three-minute short film Doodlebug, a nice bit of Kafkaesque surrealism starring Theobald as a man chasing an annoying bug around his apartment with a shoe, only to learn what he’s chasing isn’t quite what he expected. Its inclusion makes this set a nice primer on the early years of Nolan.