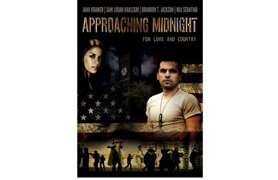 U.S. Army Staff Sergeant Wes Kent has just returned home to a small town in Louisiana from duty in Afghanistan.

He has just lost his best friend in the war, and a month prior his ex-girlfriend, Aspen, died in a car accident.

Wes has learned that the details of Aspen’s death don’t match up, and he immediately starts poking around. This gets him into trouble with Aspen’s father, the town mayor, who seems to have a role in the cover-up.

As Wes digs into Aspen’s death, he uncovers a much bigger conspiracy based in his hometown.

Single-handedly, Wes takes on the challenge of finding the truth and taking down the culprits.

This low-budget indie film is part thriller, part war drama and part romance. Though the film has a lot of heart, the storyline isn’t strong, and neither is the acting.

The character of Wes, played by Sam Logan Khaleghi, who also wrote and directed the movie, falls flat and doesn’t draw much empathy for either himself or his mission to get the bad guys.

The DVD includes five featurettes, most of which include a lot of cast and crew patting each other on the backs and a big focus on actress and country singer Jana Kramer (“One Tree Hill”), whose appearance in the film is pretty minor. One featurette centers on using real-life veterans in the film to bring an authenticity to the military scenes.