New on Disc: 'North to Alaska' and more … 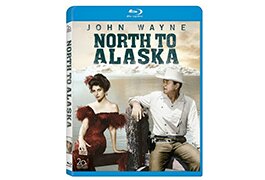 Magnolia, Documentary, B.O. $0.14 million, $26.98 DVD, $29.98 Blu-ray, ‘PG’ for some thematic material and smoking.
2013. Freda Kelly was a teenager plucked from a typing pool  to become an indispensable aide and even friend to the Beatles — a union extending a little beyond the time when the Liverpool lads finally broke up. For all this, Kelly has remained unassuming and unpretentious for 50 years — finally, just this once, agreeing to tell her story for benefit of any grandchildren who may come to think she was just some old woman who had never accomplished much in life. She doesn’t tell all she knows here — in fact, she won’t even say if she ever dated any of her employers — but this is quite a story just the same. Basically a talking heads documentary augmented by good music and some largely unseen Beatles photos that will likely short-circuit the brains of fans, Freda shows how watchable a purely functional narrative can be if the material is there.
Read the Full Review