New on Disc: 'Night of the Grizzly' and more … 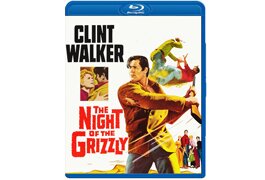 The Night of the Grizzly

Olive Films, Western, $24.95 DVD, $29.95 Blu-ray, ‘G.’
Stars Clint Walker, Martha Hyer, Jack Elam, Leo Gordon.
1966. A visually vibrant view and more fun than expected (which by all but the most relaxed standards isn’t necessarily synonymous with “good”), the Techniscope outdoor drama has horses, rural general stores and hooched-up young hotheads doing their best to disrupt the local dance, which the grizzly, at least, has the upbringing not to interrupt. The creature does, however, start clawing up horses and other livestock after former lawman Clint and his clan (including the missus, played by Martha Hyer) inherit and move onto Wyoming property coveted by the town’s vindictive powerbroker (Keenan Wynn). The filmmaker entrusted to all this was Joseph Pevney, who at this point, in consecutive career years, had to direct Martin and Lewis in the second-most contentious shoot of their screen history (3 Ring Circus) and then Joan Crawford in Female on the Beach. So cut him a break, even though Grizzly is a movie less directed than patched.
Extras: The film is easy enough to take in — which is even more true of the nearly half-hour interview of Walker (who recently turned 85) that’s part of this release. A former lawman (in Las Vegas, no less), he still exudes an “I-don’t-know-how-the-hell-I-got-into-this-business-but-am-glad-I-did” manner that is most appealing.
Read the Full Review

Available via WBshop.com’s Warner Archive
Warner, Mystery, $17.95 DVD-R, NR.
Stars William Powell, Ginger Rogers, Paul Kelly.
1935. Before MGM could even get its first Thin Man sequel into production, RKO borrowed lead William Powell to play another sleuth who liked to drink during the day. And so as not to pound the rip-off point home too much, the character here is not precisely a detective but a lawyer who enjoys dabbling with crimesolving. Nor is this guy married like the “Thin Man” series’ Nick Charles, but he does have a good-natured girlfriend (rich, too) around for aid and wisecracks. She’s played by Ginger Rogers — a performer, who like Powell, had a knack for making her co-stars look good. Working out of a cool ‘30s New York apartment where a male lounges around in a tux that he probably also wears to the deli, the two try to sleuth why the girlfriend of a Powell friend disappeared a year or so earlier in Chicago — and why they can’t even go see a New York play without having the lead actress (whose style is to wear a mask on stage) disappear as well during the performance.
Read the Full Review

Springtime in the Sierras

Film Chest, Western, $11.98 DVD, NR.
Stars Roy Rogers, Jane Frazee, Andy Devine.
1947. Some spiffer-upper at the lab controls, working with a decent 16mm print, has come up with a credible rendering of Republic Pictures’ Trucolor — which means that what we’re seeing here is supposed to look like a blend of turquoise and various burnt shades of reds and brown (or close). This said, whenever the Springtime cast can momentarily bring itself to cool it on the constant singing for a citizenry that includes gravel-voiced Andy Devine (per usual, playing a character who has to be wondering what having sex, the fights aren’t bad).
Extras: Roy and Dale Evans used to sub a lot for Dinah Shore on her Sunday night NBC “Chevy Show,” and the April 2, 1961, Easter presentation — included here as an unexpected supplement — is much more fun than expected.
Read the Full Review