New on Disc: 'Ministry of Fear' and more … 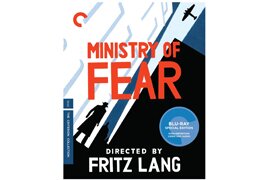 Street 3/12/13
Criterion, Drama, $19.95 DVD, $29.95 Blu-ray, NR.
Stars Ray Milland, Marjorie Reynolds, Carl Esmond, Dan Duryea.
1944. As unlikely as it seems, there was a compressed period in the mid-1940s when director Fritz Lang was in a commercially successful groove, a harmonious streak that apparently came to an end with early 1948’s money-hemorrhaging Secret Beyond the Door, which Olive Films put out on Blu-ray not too long ago. This was the Woman in the Window/Scarlet Street era when Lang almost seemed to be casting Dan Duryea as a kind of sleazy good luck charm. Duryea also shows up in this predictably expressionistic wartime Paramount release to cause disproportionate mischief despite only a handful of scenes. A Nazi-centered espionage thriller, the movie’s initial plotting mechanism turns on a weight-guessing contest involving a cake at a charity fair in a provincial English community. Thanks in part to a deep dark secret that nonetheless made the papers, Ray Milland’s character, Stephen, is nothing if not paranoid here. Winning the cake hardly improves matters and indeed almost gets Stephen killed, justifying his state of what critic Glenn Kenny refers to in Criterion’s liner notes as “nervous suavity” throughout the picture, which is the best description of Milland’s entire career (arguably The Lost Weekend aside) that I have ever read.
Source novelist Graham Greene was no fan of the movie — nor, says Kenny, was Lang himself, who may have preferred the script have been more of an overtly anti-Nazi tract. But until a jarringly abrupt tack-on at the end that feels half-hearted, the movie is better than good. Neither Kenny nor Lang scholar Joe McElhaney (interviewed on screen in a supplement) address what is, for me, the movie’s biggest problem: the lack of heat between Milland and love interest Marjorie Reynolds.
Read the Full Review

That Cold Day in the Park

Olive, Drama, $24.95 DVD, $29.95 Blu-ray, ‘R.’
Stars Sandy Dennis, Michael Burns, Susanne Benton, John Garfield Jr.
1969. Robert Altman’s great fortune in being selected to direct 1970’s MASH brings to mind Seth McFarlane’s crack during the infamous recent Oscarcast that the Oscar gig only came his way after (dumpy porn star) Ron Jeremy turned it down — which is about where Altman found himself in the pecking order of studio preferences when he got the nod to helm his career-making service comedy. MASH is usually regarded as the “first” Altman feature, but the immediately preceding Cold Day (June 1969 vs. January 1970) looks like a contender itself — or at least more so than warm-ups such as The Delinquents, The James Dean Story or Countdown.
A young Laszlo Kovacs (same year as his work on Easy Rider) gave Cold Day a lot of that patented Uncle Bob widescreen haze — and it isn’t too much of a stretch to characterize the story’s going-bonkers protagonist (Sandy Dennis) as some kind of soulmate with Susannah York’s character in Altman’s subsequent Images (photographed by Kovacs’ own Hungarian soulmate Vilmos Zsigmond). Attractively shot here, the tough-to-cast Dennis (three years post-Virginia Woolf Oscar) plays a wealthy spinsterish type who takes in an unsheltered youth she spots on a park bench during a rainstorm (he’s played by future real-life college history professor Michael Burns). Her subsequent attraction to him is slightly mysterious because the kid has a lifelong prankish habit of remaining mute for long stretches.
That Cold Day in the Park is fairly peg-able as an Altman picture for its look, its early appearance by director regular Michael Murphy and for its feminine concerns. The result feels unfinished, but you can see why Cold Day has a cult to temper its critical brick-batting at the time. The print Olive has utilized here is very good and should permanently relegate the old pan-and-scan VHS to the place where all washed-out video atrocities go.
Read the Full Review