New on Disc: 'Invasion of the Body Snatchers' and more … 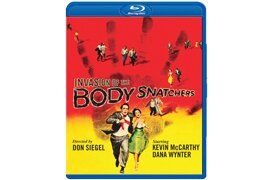 Invasion of the Body Snatchers

Street 7/17/12
Olive, Sci-Fi, $19.95 DVD, $29.95 Blu-ray, NR.
Stars Kevin McCarthy, Dana Wynter, King Donovan, Carolyn Jones.
1956. It must seem to a lot of people that this first screen adaptation of Jack Finney’s novel was a word-of-mouth classic from the get-go, but here’s a movie whose household-name status (“pod people” terminology and all that) was a result of television showings that commenced within four or five years after the film’s relatively unheralded theatrical engagements. It was and is a grabber, no matter how many times one takes the plunge — and Olive’s frill-less but visually sturdy Blu-ray has just given me perhaps my 10th or 12th viewing but the first in many years. For its sustained pleasures, we can thank the novel premise; the allegorical subtext (anti-Communist or anti-Red Scare; who knows for sure?); Don Siegel’s kinetic and even powerful direction (man, does he ever know when to go for a close-up, especially in the great greenhouse sequence); Carmen Dragon’s insistent score (which reminds me of The Night of the Hunter’s); a better-than-expected cast (lead Kevin McCarthy’s Oscar nomination five years earlier for the Fredric March screen version of Death of a Salesman had been no lie); and a Daniel Mainwaring script that lets adults act like adults. All in a pressure-packed 80 minutes.
Read the Full Review

VCI, Adventure, $14.99 DVD, $19.99 Blu-ray, NR.
Stars Lauren Bacall, Kenneth More, Herbert Lom, I.S. Johar.
1959. Director J. Lee Thompson’s kid-centered rouser is among the screen’s better vintage renderings that cheer-lead the days when Britannia ruled and busted chops when dealing with “the usual” Hindu-Muslim mischief. It’s one of those movies that everyone who’s seen it seems to like. The movie is hardly modest, clocking in at about 130 minutes in its original British cut (which this is) when it was released as North West Frontier the year before Fox picked it up. Lauren Bacall (not your everyday action hero) is top-billed, though a by-necessity sweaty Kenneth More delivers one of his typically charming performances as a Brit captain who, happily, is never forthcoming with the kind of Kipling-bred racial slurs we sometimes get in this kind of picture. Geoffrey Unsworth, later of 2001: A Space Odyssey and Cabaret, was the cinematographer, so we’re not talking about anyone’s ‘B’-team. He shot it in Eastman Color (or “Colour”), which has built-in problems, so the result is more like what you’d call a “pro job” than a rendering that knocks off not just your socks but feet.
Read the Full Review

Available via WBshop.com’s Warner Archive
Warner, Comedy, $17.95 DVD-R, NR.
Stars Red Skelton, Brian Donlevy, Arlene Dahl.
1948. This agreeable Civil War farce finds Red Skelton as a St. Louis bellhop mistaken to be a Confederate spy. Almost inevitably, the situation gets Skelton involved with a beautiful Southern spy played by Arlene Dahl. There is almost no one I know who doesn’t rate Yankee as one of Skelton’s best vehicles, a movie where star persona, subject matter and co-stars blend quite harmoniously during 90 minutes that don’t wear out their welcome. Some of the gags are said to have been dreamed up by Buster Keaton, whose name appears nowhere in the credits, but there are a few sequences where one wouldn’t exactly be struck dead to hear specifically that Keaton had done them. One of my favorites is the one in which Skelton carries a two-sided flag down a path in the middle of opposing armies. Then the wind changes.
Read the Full Review