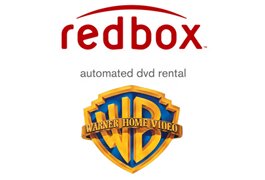 In a major move that further solidifies a retail window for DVD/Blu-ray Disc movies, Warner Home Video and Redbox Feb. 16 said they have ironed out an agreement whereby the kiosk vendor has agreed to delay receipt of the studio’s new releases for 28 days.

The delay mirrors an earlier agreement this year between Warner and online DVD rental pioneer Netflix.

"We support a vending window in light of the changing rental landscape and we are looking at a variety of new approaches," read a statement from Fox commenting on the Warner deal. "Since we are in litigation with Redbox, however, our policy is that we are unable to comment further."

Warner and Redbox will implement the deal in March, with the first delayed title slated for the March 23 release of The Blind Side (which would hit Redbox in late April). The new agreement runs through Jan. 31, 2012. Redbox has also agreed to destroy Warner DVDs following their lifespan in kiosks.

“The 28-day window for Redbox balances the economics of our relationship while continuing to offer great value to their customers,” said Ron Sanders, president of Warner Home Video. “This accord establishes a mutually beneficial relationship that will foster an ongoing and productive partnership.”

"Knowing that Redbox would not enter into any studio distribution deal that has lower economics than what the company was experiencing on its own with the workaround programs, then I view this as a strong positive," Wold said. "Clearly management has calculated an equal or upside margin benefit to moving towards this deal. This and the removal of the lawsuit should remove some clouds from the company’s outlook and stock price."

Indeed, Mitch Lowe, president of Redbox, said the agreement gives the kiosk vendor wider access to Warner titles, including movies with box office tallies below $20 million that Redbox had opted to ignore due to excessive procurement costs.

“We’ll get a lot better selection and we’ll get the [copy] depth that matches the demand,” Lowe said. “That, along with [access to] Blu-ray titles and significantly lower [disc] costs makes this a really good deal for us and Warner.”

Lowe said he couldn’t comment whether similar deals were imminent with Fox and Universal.

He credited Warner with approaching with a “win-win” proposal that provided ideal economics for all parties involved.

Lowe admitted that sustaining the costly workaround program, whereby it employed an army of drivers to locate and acquire select embargoed new releases at third-party retailers such as Wal-Mart and Target — which recently implementing purchase quantity limits — had taken a toll.

“It made it ever more difficult,” Lowe said. “That was too big of an obstacle. By taking Warner out of the mix, we are going to be able to focus our resources on the remaining two studios.”

He reiterated that parent Coinstar’s recent reduction in the number of Redbox kiosks being installed did not signify a market saturation or slowdown in the business. Lowe said Redbox would instead focus on increasing same-store (kiosk) sales.

“About two-out-of-three Americans walk by our kiosks every week, so we’ve got the kind of coverage and reach that we need to provide a convenient service,” Lowe said. “The kiosk business is still exploding and we’ve taken a lot of the great locations.”

He said rental kiosks rival the ATM industry, which at one point Lowe said was projected not to exceed 60,000 units in the United States.

“Then they [learned] how to make the machine a lot cheaper and put them in just about everywhere,” Lowe said.

Edward Woo, research analyst with Wedbush Securities, said the reduced litigation and product costs would be beneficial to Coinstar and should help it to come to settlement with Fox and Universal.

Coinstar CEO Paul Davis said the deal afforded Redbox with 90% of its content goals in 2010. He said the Warner agreement would improve margins in 2010 by 50 basis points compared to the workaround program.

Davis, who said the Warner DVDs represent about 15% of the total licensed content purchased this year, including Blu-ray, said the retail window was a welcome alternative to raising rental prices.

He reiterated that 40% of Redbox consumers purchase DVD titles after renting them.

“We would prefer not to be in the used DVD business,” Davis said.

The CEO said the studios were briefed of the Warner deal prior to the announcement.

Davis said the Paramount deal is up for renewal this year, which he believes won’t be more than a formality.

Davis said forgoing the 28-day window would have required raising daily rental fees “substationally” higher than what would be acceptable to the consumer. He said that doesn’t preclude Redbox from raising prices down the road.

“We’ve tested prices and we believe there is some elasticity in the price points,” he said.

"As long as all rentailers are on a level playing field, it’s good for Redbox," he said.  "So far, we know about Netflix and Redbox, but we don’t know about Blockbuster. If Blockbuster gets a 28 day head start, then it’s not so good."

Davis agreed Blockbuster has an advantage, which he said could be short-lived as studios increasingly believe the 28-day retail window should apply to all rentailers.