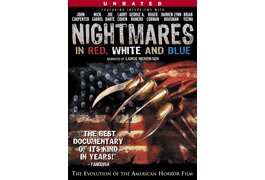 This documentary, based on Joseph Maddrey’s book of the same name, follows the development of the American horror film against the backdrop of history and the evolving idea of the American dream.

The film rightly starts with discussions of films that weren’t horror at all — such as 1915’s landmark but inflammatory The Birth of a Nation. The reference helps set the stage for horror films as those which explored elements of American life not openly discussed in mainstream society, from the Vietnam War to sexual liberation of the 1960s and ’70s to the superficiality and repression of the ’80s.

What compels people to watch horror films in the first place? How does the significance of George A. Romero’s zombies change over the course of five decades, from 1960 to the post-9/11 world? Nightmares raises a number of such questions, through interviews with luminaries such as John Carpenter, Roger Corman and Mick Garris.

The film is great as a compendium of horror film clips that should have viewers updating their Netflix queues with classic horror titles.

The execution (no pun intended) of the film’s clip montages is superb — a particularly memorable one juxtaposes the graphic sex of horror films with their accompanying graphic murders in a way that is perverse, and perversely funny.