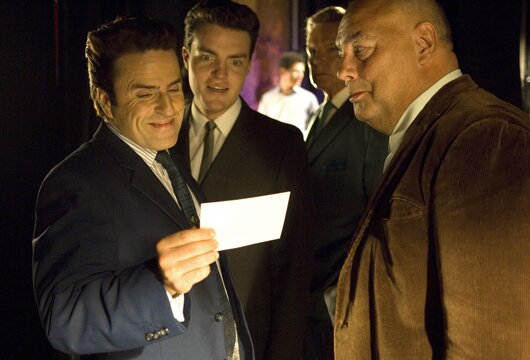 The film Telstar, released March 20 on DVD ($26.98) by Inception Media Group, tells the story of Joe Meek, the record producer who produced such songs as the 1962 Tornados hit “Telstar.” The instrumental song, with eerie atmospherics and distinctive melody played on the space-age-sounding clavioline keyboard, went to No. 1 in the United Kingdom and won the prestigious Ivor Novello Award, given solely on recording and composing talents.


Meek sank into depression in the following years and killed both his landlady and himself in 1967. Telstar, which Nick Moran wrote and directed, based on his own play (co-written with James Hicks), tells of those years when the tone-deaf Meek (played by Con O’Neill, who played Meek onstage as well) struggled to get the songs he heard in his head played back through session musicians such as John Leyton and the Outlaws (seen in the film recording his haunting “Johnny Remember Me”) while operating his recording studio above a leather-good store.

However, Meek’s scatterbrained genius came with its share of baggage. The volatile producer thought he could speak with the dead — he said Buddy Holly helped him write songs and would set up tape machines in graveyards — and he was gay at a time when that was still illegal in the United Kingdom, as seen through his tumultuous relationship with pop singer Heinz.

Moran said the genesis for the play and film came after a drunken night out with co-writer Hicks.

“Many years ago, about 1995 I think, my best mate Jim and I were staggering drunk towards a taxi on the Holloway Road with another pal, who pointed up to a plaque over 304 Holloway road above our heads,” Moran explained. “‘You know who lived there? Some mad old poof who wrote and recorded all these No. 1’s in a studio he built in his kitchen. Took loads of drugs and worshipped the devil. Shot the landlady then himself.’ My ears pricked up, obviously I thought there was a story to be told here.”

Moran said at the time he was an underemployed actor barely making a living (before he starred in Guy Ritchie’s Lock, Stock & Two Smoking Barrels).

“After a little research, we could see that Joe's life, as well as being macabre and bizarre, was also arched like a Greek tragedy,” Moran said. “A man who becomes a king, but the same strength that makes him great becomes what destroyed him. His determination becomes his blinkered arrogance. … All set to the backdrop of ’60s London and filled with colorful characters who were to go to be huge stars.”

Moran said the first readthrough of the play was at a pub with then-little-known actors Jude Law and Samantha Morton, alongside O’Neill and the rest of the cast. He said he couldn’t dream it would become a West End play and a feature film with an Oscar winner — the film also stars Kevin Spacey as Meek’s studio’s financier.

“Once he is on set, you forget that he’s a star and just think of him as a really good actor, which is what he is,” Moran said of Spacey. “He is a fantastic example to everyone else on set and a joy to direct. We had some fun as well. There's a very funny gag reel. Kevin is a too-rare example of someone who becomes a star because of how talented they are.”

Moran said he did extensive research into the film’s story, interviewing those who were involved and still alive, and that translated into an authentic retelling of Meek’s history.

“Telstar is quite rare because absolutely everything that happens in the film happened in real life, in the same places and in the right order,” Moran said. “It might have improved the story if we changed things, but I don't think so. One Hollywood producer I spoke with was interested in the script but wanted Joe to be heterosexual so he could attach a female star as a love interest. That's just not the film I wanted to make.”