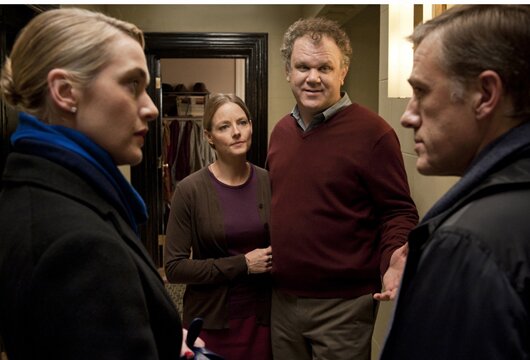 Sony Pictures Home Entertainment will release the Sony Classics film, which was nominated for two Golden Globes (for Foster and Winslet’s performances), March 20 (prebook Feb. 16) on DVD ($30.99) and Blu-ray ($35.99).

The story concerns two New York couples who come to meet because the son of one couple punches the son of the other. One couple, played by Waltz and Winslet, at first seem like stereotypical uppity Manhattanites, he on his phone every two minutes to discuss some Wall Street conundrum, she pressed and polite, eager to keep up appearances and smooth away her husband’s rudeness. Foster and Reilly, on the other hand, play, on the surface, a more down-to-earth couple, consisting of a bleeding-heart liberal who pushes fairness and justice upon her peers, and a working-class man who has worked his way up into the upper middle class and carries its associated manners but also a certain internal darkness.

The film takes these four and places them into a room, bouncing their conflicting views and veneers off of one another until all niceties melt away and what’s left is a truer, harsher view of humanity through these people.

“When the gloves come off, it’s pretty revealing,” Reilly said of the characters.

With a film such as this in which nearly all of the action takes place in one room, between four characters, two weeks of rehearsals took place before anything was shot for the film. But don’t expect any of that rehearsal footage to make the home video release, according to Waltz.

“If I had a say in these things, I would do away with all this ‘behind-the-scenes, making-of’ rubbish,” Waltz said. “It’s nobody’s business. Why would you poke your nose in our rehearsals? Where do we then have our safe space where we try and make fools of ourselves and just fathom what it is we need to do?

“… It’s a huge drag, and I try to avoid making-ofs, EPKs, blah blah, ‘Can you explain your character?’ … Why would I? I would be doing myself and the story and, most of all, your experience watching the film, the greatest disservice possible. I’m just there to incarnate … the character that has no body when it was written.”

If there’s one particular sequence of Carnage sticks out in many viewers’ — and the actors’ — minds, it’s when Winslet’s character throws up the peach cobbler the nervous other couple has been foisting upon them. Her character runs off, mortified, to clean herself off, while the others stick around to deal with the mess.

“It was days of that. It was horrible. It was really gross,” Reilly said. “Everyone’s like, ‘Poor Kate, she had to vomit.’ I had to clean up Kate’s vomit.

“… Needless to say, I haven’t had cobbler since I made the movie.”

Regardless, Reilly said the cast of heavy-hitters got along smoothly.

“There wasn’t a diva in the bunch,” he said.

Both Waltz and Reilly had only the highest praise for Polanski, whose resume includes classics from Chinatown to The Pianist.

“If you look at his movies, the only thing that really kind of strings them all together is like, they’re excellent,” Reilly said. “They’re really well-made and beautifully photographed. … He has a lot of variety as a director. I thought this was a really gutsy movie for him to make.”

When asked what Polanski brought to his performance, Waltz replied: “Precision. Exactitude. Concreteness. All the qualities that I adore and that I really strive for and that I’m grappling with and fighting with, and where I derive all my inferiority complexes and all that.”

Perhaps that precision is why the film’s DVD and Blu-ray don’t include any deleted scenes.

The DVD and Blu-ray do include a making-of of sorts in the form of an “Actor’s Notes” featurette, as well as a red carpet featurette and another dubbed “An Evening with John C. Reilly and Christoph Waltz.”