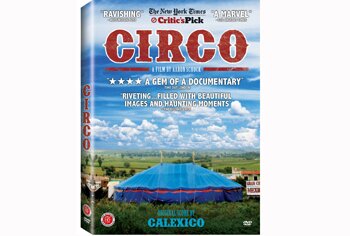 Often documentary films made about or in Mexico focus on the immigrant experience. The desire to do something different — to make a film about everyday people struggling to make it in Mexico — is what drove Aaron Schock to make his first film, first envisioned as a documentary about corn farmers in Mexico.

But, by happenstance, he watched a traveling circus come into town while filming in Mexico. He became intrigued by the family behind the traveling circus and after hitting it off with them, ended up filming them on-and-off for 21 months.

The resulting film is the lively Circo, which First Run Features will release on DVD Sept. 20 at $27.95. The film follows the Ponce family as they take their family-owned and -operated circus around rural towns in Mexico.

“I was fortunate to find folks who were open to outsiders and having someone enter their unique world,” Schock explained. “They’re also people who are used to being seen, in some ways. They’re performers; they’re used to being on the stage and having an audience. I think for them, from the beginning, for me to go in and film them doing their show — even filming them in their daily lives, setting up and taking down the circus — seemed normal to them.”

The result is quite candid, as we see the struggles the Ponce family deals with. Tino keeps the show together, with his wife, Ivonne, and their children, who perform in the show as contortionists and tightrope walkers. But Ivonne wants her children to have a more normal life — and for the family to make their own money, instead of handing over the lion’s share to Tino’s father, who runs the show, causing marital tension.

“The themes that kind of became of interest to me [while filming] were this question of filial responsibility — what it is we owe to parents and what they owe to us — and how complicated that can be,” Schock said. “Different times, different cultures and so on have different ways of dealing with that, and I felt I was [filming during] a time in which that was changing from one generation to the next.

“I think that’s what you’re seeing in Mexico now,” he added. “People are coming to the U.S. for their kids, not for themselves.”

But the film is not necessarily political in nature, Schock said.

“It’s about how tradition can be a gift, as well as a burden,” he said. “I think more simply it’s really about a family that is just struggling to make a living in rural Mexico. If I have any real agenda with the film, other than exploring universal themes and entertaining audiences … it’s to have some sense of sympathy for how hard people really do work in that part of the world, and have some kind of sympathy for people who eventually do have to flee that to come to the U.S.”

The Circo DVD comes with three featurettes: a making-of featurette with Schock, a follow-up with Ponces and a featurette with the band Calexico, who scored the film and released a soundtrack separately on CD via their own Casa de Calexico label. And for those who fall in love with the Ponces, as Schock did, donations can be made to the family at www.circomexico.com.