<< Digital and Disc Can Play Nice | Blog Home | Are the Days of the Rental Superstore Over? >> 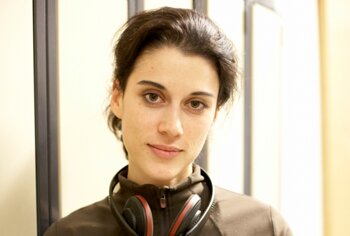 Although writer/director Cherien Dabis’ Amreeka, out on DVD from Virgil Films at $24.99, tells a Palestinian-American story, don’t confuse it for a dry diatribe on the global state of affairs. Far from it, Amreeka is a warm, hilarious immigrant tale to which, in Dabis’ words, “anyone who’s felt like an outsider can relate.”

“My favorite response has been from the Arab-American community. A number of people have said, ‘I’ve never been prouder to be Arab,’” Dabis says. “That’s a really lovely thing to hear. It’s really humbling.”

Amreeka is loosely based on some of Dabis’ own experience growing up as a Palestinian-American in both Jordan and Ohio. In the film, Mona (played by Nisreen Faour) and her teenage son move to a town in Illinois about an hour and a half outside of Chicago, with her sister and away from the grim state of the West Bank. Mona takes a job flipping burgers at a White Castle, while her son deals with bullies at school.

The irrepressibly spirited Mona was partially inspired by Dabis’ aunt, who moved to the United States from Jordan in 1997.

“I guess it wasn’t really her story that inspired me as much as her attitude and demeanor,” Dabis explains. “She was just so hopeful and optimistic in the face of these great challenges before her. She was a single mom, like Mona, she had a hard time finding work, but she continued to have such trust and faith in people. She ended up having the most unlikely friends because people fell in love with her.”

Most critics have lauded Amreeka, which received a standing ovation at a screening at Sundance, with positive reviews from the likes of Entertainment Weekly, USA Today and The Los Angeles Times. However, some (Time Out New York, The Onion) were less praiseworthy about what Dabis calls the “tried-and-true immigrant story.”

“I feel like it’s also a matter of certain people expecting a certain kind of story to come out of that part of the world,” Dabis says. “To make it that much more universal, I sort of packaged it in the immigrant genre film. [But] it’s told from a unique and fresh perspective.”

That perspective comes in the form of a lighthearted and enjoyable film rather than a didactic one. Amreeka’s messages about respect and open-mindedness come through in humorous episodes rather than an ominous fable.

“Early, [the script] was probably weighted toward these villainous characters, and I sort of had to pull back and realize that there needed to be a balance in order to represent a range of reactions because that’s the truth,” Dabis says. “When my family was ostracized during the first Gulf War, there were people who stuck by us. The thing that’s really nice to show, is how people can come together and stand by you and stick up for you.”

The Amreeka DVD comes with a number of deleted scenes Dabis says she cut in order to make the movie more economical, as well as a short film by Dabis titled “Make a Wish,” about a girl in Jordan trying to make enough money to buy herself a birthday cake, that is similar in tone to Amreeka. Dabis says she wrote the short around the same time and filmed both “Wish” and scenes from Amreeka in Ramallah in the West Bank, using actors and a crew she and her cinematographer trained from the area.

“It was kind of exciting because I felt I was a part of this burgeoning film community in the Palestinian West Bank,” she says.