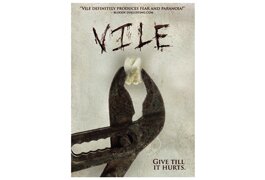 Sometimes being a good Samaritan can get you in trouble — the kind of predicament Nick, his pregnant girlfriend and two friends awake to after being gassed by an attractive woman in need of roadside assistance.

The group finds itself sequestered in a dank house along with four others with no escape. They all have tubes attached from their skulls to tiny bottles behind their necks. In a twist on the “Saw” franchise, the captives are instructed via videotape message that they must fill the bottles with a specific chemical the body produces when under intense duress or fear.

Generate the required amount of the chemical and the eight hapless souls will be allowed to go free, they are told. The insidious premise quickly turns friends to foes, as simply killing the other person is deemed too swift and won’t satisfy the on-screen progress meter. In other words, only extended pain and torture — not death — are the paths to freedom.

Despite a low budget and unknown cast, Vile showcases inventive ways the conflicted victims attempt to survive by exercising controlled mayhem on each other. Collective reasoning determines that measured doses of nail pulling, screwdriver puncture wounds, broken limbs, a strategically placed hot iron, cheese grater (who knew?), hammer bludgeoning, etc., will generate the mandatory amount of the chemical and still allow them to limp out alive.

While the lack of character development renders everyone more or less expendable, Vile leaves you guessing as to possible ulterior motives among some housemates. The film throws in a few twists and explanations at the end (if anyone cares) — after the bloodletting, of course.