Pathfinders: In the Company of Strangers (DVD Review) 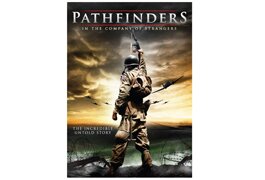 Before American troops dropped down in Normandy on D-Day, a group of American paratroopers were sent in ahead of time to prepare the way. The mission of these “Pathfinders” was to locate a drop zone, light it up and set up a transmitter for the incoming airborne invasion. They had 30 minutes to accomplish this.

As if the mission wasn’t dangerous enough, the Pathfinders’ drop area was near a German base populated with specialists in anti-parachute maneuvers.

Without the Pathfinders to light the way, the troops about to drop on Normandy would have no chance of success. However, even if the Pathfinders were successful, there was still a 98% chance that the Allied air invasion wouldn’t follow.

To further complicate matters, the operation involved two companies. One was to set up the lights and the other to keep those men alive. These two companies didn’t know each other until just weeks before the drop, making it uncomfortable for the light group knowing their lives were in the hands of these strangers known as The Jokers.

As history tells us, D-Day was a success, but the significant role the Pathfinders played isn’t a huge part of the history books. Pathfinders sheds light on the bravery of these soldiers who jumped into what many of them believed was a death trap. The film shows the fear in the soldiers’ faces while they carry out their mission without hesitation, showing the true courageousness of their acts.

Pathfinders also depicts the violence of hand-to-hand combat and the brutality of having to leave behind dying comrades in order to complete the mission.

Where the film may fall short in acting it makes up for it in authenticity. There’s even a note at the end of the credits that explains why the jump sequence was shot unlike how it happened in real life in order to keep up the pace with the film.

For anyone interested in historical films or war dramas, this one isn’t to be missed.