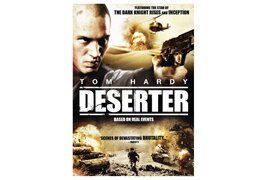 What’s a former colonial power to do when it lacks the financial reserves to control militarily its foreign territories? Hire mercenaries.

That’s a brief raison d’être for the French Foreign Legion — a for-hire military subsidiary of the French army created in 1831 for foreign nationals (no French!) willing to fight for French interests around the world. Recruits commit to five-year enlistments in exchange for military training, a modest stipend and service in a foreign territory. There is just one golden rule: Legionnaires caught deserting will be shot on sight.

The Peace Corps it isn’t.

Against this historical backdrop, 2002 British independent film Deserter finds a young Simon Murray (a real-life Legionnaire who co-wrote the screenplay and is played by Paul Fox) enlisting in 1960 in an effort to escape a broken heart back home in London and a chance to see Algeria, which is under siege from Arab nationals seeking independence from French rule.

Another recruit, Pascal DuPont (Tom Hardy), is a straggle-tooth Pied-Noire — French Algerian — who has joined up as much for honor as for ulterior vengeance.

Much of the movie’s early scenes underscore the training rigors and machismo involved in turning young men into soldiers. The sequences — some of which find DuPont trying his best to reject callous drill sergeants through Cool Hand Luke-style nonconformity — lack the impact of Stanley Kubrick’s Full Metal Jacket or Joel Schumacher’s Tigerland, among other coming-of-age war films.

While uneven editing between scenes undermines the preamble, Deserter gets better as Murray delves deeper into the conflict and local politics of the rebels — discovering along the way that allegiances — and love — can be illusionary. Much of this is outlined in sullen voiceovers.

Hardy, of course, is why Deserter is being released 10 years after its completion. Starring in the upcoming theatrical conclusion to director Christopher Nolan’s “Batman” trilogy, Hardy back then already showed glimpses of an unhinged screen persona easily able to overcome a script’s shortcomings.