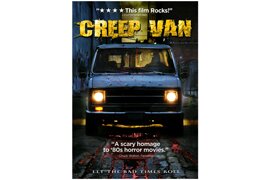 That’s because director Scott Mckinlay and writers Jim Bartoo and Adam Jahnke don’t mess with explaining why a deranged lunatic (i.e. “The Creep”) is driving around suburban Detroit in a rusting white van equipped with myriad means of killing and dismembering people from both the inside and outside.

Instead, the viewer is treated to a panoply of visually pleasing FX gore, including razor-sharp automatic windows, strangulating seatbelt harnesses, spike-laced airbags, skull-smashing car doors and impaling bumpers, among other insidious means of inflicting extreme pain, suffering and gratuitous death on unsuspecting victims.

Campbell (Brian Kolodziej) is a hapless good-looking wannabe actor who struck out in L.A. and is back home in Michigan without a car, a job or life. He lands a gig at a local car wash inundated by pot-smoking thieves, a Viagra-obsessed owner (Gerald Emerick), obnoxious customers and wholesome receptionist Amy (Amy Wehrell).

Campbell, when not fantasizing about Amy, spends his days trying to stay out of self-inflicted missteps while taking the bus to work. When he spies a “For Sale” on the side of the “Creep Van” (which the killer uses to lure victims), Campbell, of course, fails to close the deal, while instead unknowingly bringing the killer into his world.

If there is a saving irony to Creep Van, it is that none of the ne’er-do-well characters (including Campbell) is worth saving. Enjoy the mayhem.