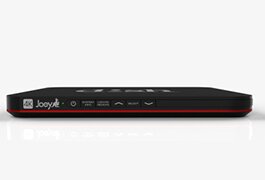 Dish Network has had a busy pre-Consumer Electronics Show.

The satellite TV operator Jan. 5 announced that it would be the first pay-TV provider to launch a 4K Ultra-HD set-top box. Named the “4K Joey,” the device is designed to integrate with Dish's Hopper DVR.

With four-times the resolution clarity of 1080p, 4K resolution, including TV monitors, distribution channels and content, aims to be a key point of focus at CES Jan. 6-9 in Las Vegas.

Unlike other 4K pay-TV options confined to an app on select TVs, the 4K Joey is compatible with all HDMI 2.0/ HDCP 2.2-compliant televisions. The 4K Joey will not only play back 4K Ultra-HD content, it will also enhance everyday viewing of television and sports programming by supporting side-by-side display of two programs, each in HD.

This picture-in-picture capability was not possible previously and is ideal for sports fans who want to watch two games playing at the same time.

Dish will deliver 4K content from several providers. Specific announcements will be made closer to the consumer launch of 4K Joey, which is slated for the second quarter.

The new set-top box is equipped with a Broadcom dual-core chipset, Ethernet connections, and Broadcom 7448 dual-core ARM processor. It also features Bluetooth and supports Hopper apps such as Vevo, Netflix and Game Finder.

"Our new 4K Joey offers the most versatile, future-proofed 4K setup for our customers," Vivek Khemka, SVP of product management, said in a statement. "It's easy to install and works with the most 4K televisions, so no matter what brand customers bought over the holiday season, they can enjoy content through Dish."