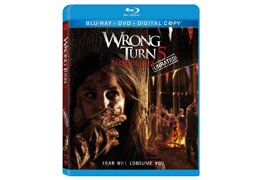 The irony of Wrong Turn 5: Bloodlines is that the horror franchise has made all the right turns since launching in 2003. You didn’t have to be a fan of inbred psychopathic hillbillies tormenting hapless travelers in the backwoods of West Virginia to appreciate the strength of sexy survivor Eliza Dushku outwitting the mutants in the original.

The latest direct-to-video installment, Bloodlines, again finds a carload of sexually promiscuous college-age coeds in search of the Mountain Man Festival on Halloween. The storyline is a convenient cover for the venerable hillbillies, Three Finger, Saw Tooth and One Eye, to lay siege — in their normal attire — on the local sheriff station where their acerbic leader Maynard (Doug Bradley) is being held by tough-as-nails female Sheriff Angela (Camilla Arfwedson).

Maynard was apprehended unsuccessfully trying to lure the carload of coeds to their grisly demise — an operation that results in the arrest of one of the students on charges of drug possession, and subsequent graphic gutting of Angela’s deputy sheriff. With other sheriff personnel busy on crowd control (including having sex in a squad car) at Mountain Man, it’s just Sheriff Angela, a lone drunk, the student and his visiting companions to fend off the invading goons.

While the movie is a far cry from John Carpenter’s 1976 ‘B’-classic Assault on Precinct 13, Bloodlines actually leaves you rooting for the hillbillies in kind of a sick Darwinian way.