Erroll Garner: No One Can Hear You Read (DVD Review) 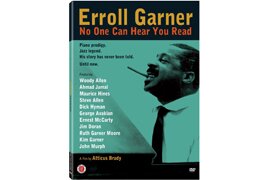 I’ve always counted Fats Domino and Thelonious Monk as the two pianists most fun simply to watch play, but Erroll Garner belongs on the list as well, in that “happy” (and better, infectious happiness) is probably the word most used to describe his relationship with the keyboard. That and the fact that his playing was full of flourishes — and with no hint at all of what was coming from his lead-ins. One interviewee in Atticus Brady’s long-gestating documentary notes that he once witnessed a group of audience members standing up during one of Garner’s performances just so they could get a look at exactly what his hands were doing.

Self-trained apparently from age 3, according to an interviewed sister, the native of unheralded jazz-mecca Pittsburgh couldn’t explain his technique and referred to it as a gift, which it apparently was. Prolific in his concerts, albums and TV appearances on all the big variety and talk shows before his 1977 death, he was often less than a critics’ darling, not as influential as some and (this is one of Read’s main themes) unjustly forgotten today. Even aside from the Garner-composed "Misty," which is about as much of a standard as there is, this last was a surprise to me: Like the best of the Sinatra or Beatles LP’s, Garner’s 1955 Concert by the Sea album is one of those albums that always seems to be playing in your mind, 41 minutes of perfection. Recorded live in Carmel (hence its title), it exists because a member of the predominantly military audience asked if he could hit the tape recorder button as a courtesy to colleagues who were unable to attend. Even by the relatively primitive standards of the day, the recording quality is hardly as elaborate as Garner’s playing — but still: it either must have been some tape recorder or the guy really knew where to situate it.

Because so much Garner footage does exist (in which, more often than not, he is perspiring), Brady’s portrait is rich in fruits from the archival vaults, and his on-camera admirers here include Woody Allen (briefly), Dick Hyman (exceptionally good here), George Avakian and an engagingly spry Steve Allen, whose 2000 death points up just how long this documentary was in production. Jazz lover Allen, who was a musical collaborator with Garner, calls him his favorite jazz pianist ever and had him on his variety shows countless times. The guest list on one 1960 Allen hour I own included Garner, Tony Bennett, Ginger Rogers, Henny Youngman and Bill Dana doing his funny but long culturally disreputable Jose Jimenez routine; talk about pressure-packed. In a similar way, Brady also gets a lot into a compact running time, even snagging an interview with a daughter that his never-wed subject fathered. Garner, it is noted, was quite a ladies man, which might be one reason his playing was so happy.

New on Disc: 'Erroll Garner: No One Can Hear You Read' and more …