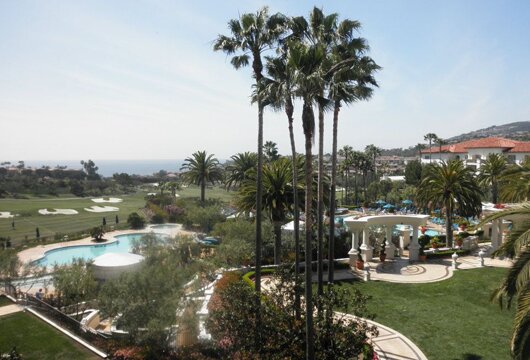 It’s a tribute to the St. Regis Monarch Beach Resort in Dana Point that even though it’s a mere 35 miles from my home in Carlsbad — and an hour’s drive from Los Angeles, where I spend much of my time during the work week — the moment you drive through the gates you feel you’re in a different world.

Sitting by the pool just before sunset, my 9-year-old son took a sip from his virgin pina colada and remarked, “It’s like we’re in Costa Rica,” referring to our 2011 summer vacation.

That may be a bit of an exaggeration, at least from a grownup’s standpoint — but, still, that’s a pretty powerful statement about the transformative powers of a first-class resort.

The St. Regis Monarch Beach is one of three five-star resorts on the southern Orange County coastline — next to Big Sur, the most spectacular in the state of California. The others are the Ritz Carlton, also in Dana Point, and the Montage, a few miles north in Laguna Beach.

The St. Regis opened in August 2000 on a commanding 172-acre spread overlooking the Pacific Ocean — 16 years after the Ritz Carlton and three years before the Montage. The Tuscan-inspired resort offers 400 elegantly appointed guest rooms, including 74 suites; three heated pools and two Jacuzzis; a botanical garden; tennis courts; an 18-hole championship oceanfront golf course designed by Robert Trent Jr.; a 30,000-square-foot spa; and more than 30,000 square feet of meeting space, including a 12,000-square-foot ballroom.

While both the Ritz and the Montage are located directly on the shore, the St. Regis is about a half mile back, on the other side of Pacific Coast Highway. But that hardly puts the resort at a disadvantage. A tram takes visitors to a private beach on the north end of the golf course, which stretches from the hotel all the way to the ocean. And on the south side, a lovely walking trail, through the city of Dana Point’s Salt Creek Park, winds its way to a postcard-pretty public beach that’s wide and sandy and flanked on either end by rocks and tidepools.

Taking a leisurely stroll to the beach — or a lengthy run along the walking trail that parallels the shore — is a pleasant diversion from the resort. But I did find it difficult to tear myself away from the main pool, with its majestic fountain, and the wonderful Spa Gaucin, a well-appointed and impeccably maintained facility that ranks among the 25 best in the world, according to Travel & Leisure.

Dining options at the resort also are first-rate. The Stonehill Tavern is the resort’s signature restaurant, created by celebrity chef Michael Mina. For waterfront dining with the waves crashing to shore just a few feet from your table, try the Monarch Bay Club, a short tram ride from the hotel’s front entrance.

Aside from the spa and golf course, one of the more interesting activities the St. Regis offers is individualized surf lessons from what the resort calls its “Surf Butlers.” Wetsuits and surfboards are provided.

For travelers who are looking for meeting space, the St. Regis Monarch Beach has a total of 30 meeting spaces. The biggest is the Pacific Ballroom, which measures nearly 12,000 square feet. For smaller, more intimate business meetings and events, the hotel now offers the Malta Boardroom, a high-tech facility that features a 60-inch plasma television, built-in Internet, video conferencing, drop-down screen, flown projection and integrated sound system. The room also showcases fully remote-controlled AV, curtains and lighting schemes. For receptions and events, the Malta Boardroom can accommodate up to 50 guests; in a boardroom setting, the capacity is 20.

For the summer, the St. Regis Monarch Beach has several special events on tap, including the annual Butterfly Ritual, in which Monarch butterflies are released from the ocean-view terrace each Saturday evening at 7:30 p.m. The site of the St. Regis was originally a breeding ground for the orange-and-black butterflies. The butterfly release takes place weekly from May 28 through Sept. 3, and begins with a procession through the main lobby to the terrace and a reading of the Monarch butterfly legend.  Then, a St. Regis Butler releases dozens of live Monarch butterflies. Children get to bring another set of once-frozen butterflies to life by warming them in their hands before they take flight while parents indulge in a champagne toast. The event is part of the Love Your Family package, with rooms starting at $500 per night, and includes a daily $100 resort credit.

One final note: The St. Regis Monarch Beach is popular among celebrities, including Ludacris, Justin Bieber and Selena Gomez. Bieber and Gomez spent the night in the Presidential Suite in February 2011 to celebrate the young singer’s 17th birthday. The St. Regis also is where AIG executives partied to the tune of $440,000 in 2008 less than a week after the insurer’s $85 million federal bailout.