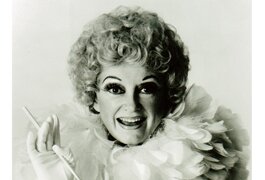 For a stand-up comedienne renowned for her exhaustive laugh, it might seem ironic that Phyllis Diller — who died Aug. 20 at the age of 95 in her Los Angeles home — coveted silence and space.

In a 2006 interview with Home Media Magazine for her last stand-up comedy performance in Las Vegas — captured on the DVD Goodnight, We Love You: The Life and Legend of Phyllis Diller released by Image Entertainment — Diller revealed that life to her had become an exercise in escaping a cacophony of unwanted noise.

She said a recent dinner out at the trendy Mr. Chow restaurant in Beverly Hills left her feeling like she had eaten at the airport.

“You couldn’t hear anyone,” she said. “Now that I’m really old, I realize one of the things it takes a lot of money to buy is silence. In my home I have silence … and it costs a lot of money.”

Diller then let out her signature laugh — a pronounced cackle perfected over the decades that started loud and just sort of hung in the air as she exhaled slowly.

Bob Hope discovered Diller after seeing her act at a supper club in Washington, D.C. The comedienne began her showbiz career at the age of 37 after a previous life as a housewife and mom.

Diller, who would appear in several Hope movies, moved to Brentwood (a suburb of Los Angeles) and began appearing regularly in Las Vegas and on television.

While well known for an affinity for plastic surgery, big hats and wigs, and a distain for housework and a fictitious husband named Fang, Diller also had a love of cooking, vintage automobiles and art (she was an acclaimed painter).

In addition to voiceovers in recent theatrical animation releases, including Disney/Pixar’s A Bug’s Life, Diller DVDs included Phyllis Diller: Not Just Another Pretty Face (MPI) and On Location With Phyllis Diller (Standing Room Only), among others.

On Goodnight, We Love You, notable scenes included a reunion of Diller’s personal assistants over the course of 47 years, or “dust biters,” as Diller called them. She said the average assistant lasted two years.

Goodnight, We Love You is available on DVD and electronic sellthrough at Amazon.