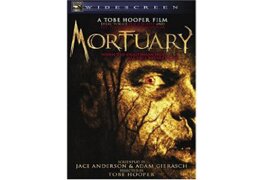 The one thing that separates Mortuary from your typical low-budget horror flick is that the film was directed by legendary horror-helmer Tobe Hooper. Hooper, of course, is best known for the original Texas Chainsaw Massacre and Poltergeist. These days, he's firmly in ‘B'-movie land, and, true to form, Mortuary stars several other horror-movie has-beens, including Crosby (Pet Sematary) and Byrd (The Hills Have Eyes).

The plot works as well as any other horror plot: A single mom moves her brood to California to start a new life and settles in a long-abandoned funeral home. Talk around town is that the grounds are haunted and that the son of the home's old owners, who wore a burial shroud to hide his deformed face, still lives in one of the tombs. The family soon discovers the truth is even worse than the gossip.

The opening sequence is comical, although I'm not sure that was the intent: Mom solemnly tells her little daughter that bodies are in the basement and not to worry and then explains to her teenage son why she's moving the family into a mortuary: “It's the reason I went back to school. It's a new career for me and a new start for us.”

But the laughs stop there, as the film takes a quick turn to the dark side, complete with buckets of blood, raging teen hormones and vile, otherworldly creatures. In classic Hooper style, moments of true poignancy alternate with scenes of savage brutality, and each serves to heighten the power of the other.

This is hardly one of the director's best movies, but it's still a solid film and significantly better than most of the other ‘B' horror films studios are grinding out.