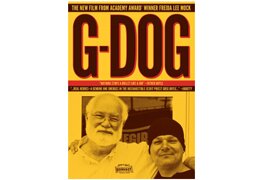 Nothing stops a bullet like a job. So says Father Greg Boyle, the charismatic Jesuit priest behind Homeboy Industries.

He founded this life-changing organization in the heart of Los Angeles’ gang territories at the height of its violence 25 years ago.

The gang intervention and rehab program isn’t about making peace treaties between the gangs or just telling them to quit. Instead the organization treats gangs not as a problem but as a symptom. Father Greg addresses the problem with counseling and substance-abuse classes, as well as teaching gang members the life skills to turn their backs on the gang life forever with tattoo removal, job training and parenting classes.

G-Dog — as the homies call him — gives these young men and women a second chance at life but with strict rules to be accepted into and stay within the program. Former gang rivals who used to shoot at each other end up working alongside one another in the café and bakery, taking classes together, and end up friends.

With a 70% success rate, his organization has drawn attention from the White House and from people around the world who have studied what Homeboy Industries does in order to create similar programs in their own cities.

Oscar award-winning director Freida Lee Mock interviews Father Greg and several of the people who have transformed their lives because of Homeboy Industries. The documentary goes into the offices to show what they do and trails the organization during one of its most tense years, when they faced layoffs and even possibly having to shut down.

If ever there was a living saint, surely it is Father Greg, with his boundless love and compassion for those who never felt either of those things.