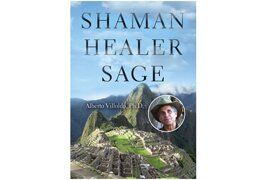 Shaman Healer Sage opens up the world of shamanism through the life and studies of Alberto Villoldo, Ph.D.

This documentary, inspired by the book of the same name by Villoldo, reveals how he left San Francisco State University, where he had a career at the psychosomatic research institute, to travel around the world to investigate how to advance psychosomatic health. He ended up studying and training for many years with highly respected and revered shaman and sages in South America.

Shamanism encompasses ancient wisdom teachings, healing practices and rites of passage or initiation that originated in the Himalayas. It doesn’t work on the physical body but on the luminous energy fields around it.

While studying, Villoldo experienced his own healing and became a venerable healer himself after his decades of study with the masters. His goal has been to teach shamanism and bridge those ancient practices with the modern Western world.

Though detailed and informative, Shaman Healer Sage is only an introduction to the ancient and intricate world of shamanism. Still, the film breaks down in easily digestible stories and re-enacts some of the basic tenets of these revered indigenous practices.

The bonus featurette “Energetic Interventions” runs nearly an hour long and offers more details and demonstrations about some of the beliefs mentioned in the feature film. It explains more about the nine chakras, the healing ceremonies of the Illumination Process and Soul Retrieval, and the Symbolic Death Rite.