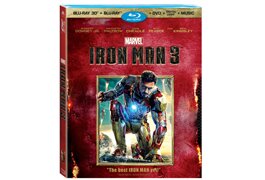 Being the first film in the Marvel Cinematic Universe to follow The Avengers was bound to be an unenviable task. While that film’s immense success validated the strategy of introducing the main characters in their own films, it also elevated expectations for the level of quality the franchise could achieve.

It makes sense, then, to kick off the build-up to the Avengers sequel with another “Iron Man” movie, since those were the most popular among the five that constituted Phase One. In addition to continuing the story of Tony Stark (Robert Downey Jr.), Iron Man 3’s burden of being the first follow-up to The Avengers takes on an added dimension because that was closer to a true sequel to Iron Man 2, which might qualify the “Iron Man” franchise-within-a-franchise as the first trilogy to consist of four films.

Iron Man 3 picks up months after The Avengers, with Tony struggling to cope with having battled an alien invasion. He distracts himself building a legion of new armors, until he is drawn into investigating a series of terrorist attacks by the mysterious Mandarin (Ben Kingsley), which may be connected to a medical experiment called Extremis designed to give people superpowers.

After the second film diluted its story by laying the groundwork for The Avengers, Iron Man 3 smartly keeps the focus on Tony by forcing him to confront the challenge on his own without going out of its way to set up future films. The result, while not quite as good as the first film, should keep fans entertained, provided they aren’t comic book purists turned off by Batman Begins-style plot twists and changes to the source material. A rousing final battle and some effective 3D sequences should be enough to overlook any flaws.

Director Shane Black and co-writer Drew Pearce discuss these changes and much more in a thoroughly engaging commentary that really dissects the film and reveals how the raw elements coalesced into their final form.

The commentary is just one of many extras on the Blu-ray, which lives up to the standards set by the earlier Marvel films.

One feature that should keep fanboys occupied for a while is the JARVIS second-screen app, which lets viewers scour the menus in search of hidden codes that unlock a database of Tony’s hall of armor.

Other extras include several production featurettes and deleted scenes (but not the footage shot for the Chinese version). But the centerpiece of the bonus materials is the Agent Carter short film, a follow-up to Captain America: The First Avenger, about the early days of spy agency S.H.I.E.L.D. (now the focus of its own ABC TV series), and the attempts by Peggy Carter (Hayley Atwell) to prove herself in an industry dominated by men. It can’t hurt that another “Captain America” movie is due out next year.