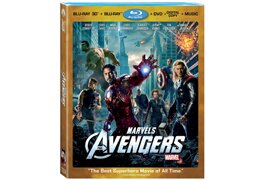 The idea of a massive superhero crossover film was first teased with a bonus scene tacked onto the end of Iron Man, with the promise that there was much more to come. That promise has paid off spectacularly, and not just at the box office.

The Avengers is effectively a sequel to four different films (Iron Man 2, The Incredible Hulk, Thor and Captain America: The First Avenger), and yet functions on its own without viewers having the see any of the precursors. However, a passing familiarity with the characters does help, and viewing the other films first is highly recommended to fully appreciate how many of the character arcs come together in this film.

But, more importantly, The Avengers is just so darn fun. And the 3D enhances several details that aren’t as easily visible in the 2D version, especially during the final battle.

The film is filled with images that seem lifted directly from a splash page of a comic book. A lot of care has been taken to craft a story that gives fans what they want to see: epic battles involving Earth’s mightiest heroes, who spend a lot of time beating each other up before putting their differences aside to defend Earth from an alien invasion.

Most of the credit has to go to writer-director Joss Whedon, who turned out to be the perfect choice to handle the material because of his talent for finding joy in simple yet impactful (and often hilarious) visuals where many directors would overthink a scene because they didn’t want to do something too obvious. Whedon knows what the fans want to see because he is one himself.

For those who love behind-the-scenes stuff, be sure to check out Whedon’s solo commentary, which is filled with stories and the director’s trademark dry wit and self-deprecating humor.

Also interesting are the 15 or so minutes of deleted scenes, which include the original scenes used to open and close the film, plus a lot more of Captain America trying to acclimate to modern life. A few of these scenes have resonance with some scenes in the final film.

Less interesting are the behind-the-scenes featurettes, which are kind of standard for a major release such as this. The disc also includes a gag reel, a Soundgarden music video and a second-screen mode.

As far as the storyline is concerned, the best extra is Item 47, the third of the “Marvel One-Shot” short films that have been popping up on the Blu-rays. This one takes place after the events of the film, focusing on a couple (Lizzy Caplan and Jesse Bradford) who find an alien weapon and go on a bank-robbing spree, earning the attention of S.H.I.E.L.D. agents Sitwell and Blake (Maximiliano Hernández and Titus Welliver). The fact that it uses some recognizable stars in otherwise throwaway roles has fueled speculation that it could set up the upcoming “S.H.I.E.L.D.” TV show, though subsequent statements from Caplan and Whedon seem to indicate that isn’t the case.