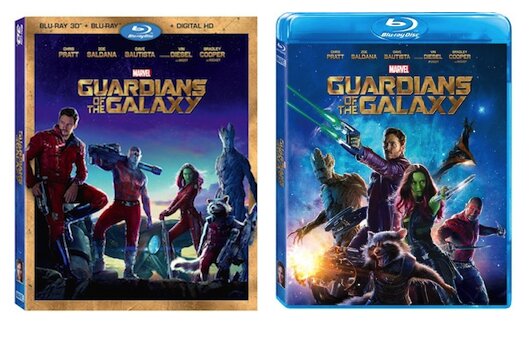 The musically inclined anthropomorphized plant is just one of several iconic elements to emerge from a film that by all rights probably should not even exist, let alone top the U.S. box office chart for the year.

For starters, there's the concept: a ragtag team of obscure comic book characters, one of whom happens to be a talking raccoon, flying around outer space looking for trouble. There's the ’70s rock soundtrack that at first blush seems bizarrely out of place but fits the tone of the film perfectly. And at the center of it all is the director, James Gunn, whose best-known work was the low-budget horror film Slither and a handful of "Scooby-Doo" screenplays.

Yet Gunn has managed to combine all these elements into a winning formula that thrives on irreverence, humor and heart. It also helps that Disney and Marvel Studios marketed the film perfectly, giving audiences plenty of time to prepare for the thrill ride they were in for.

Guardians of the Galaxy is the 10th film in the vaunted Marvel Cinematic Universe, but it's the most standalone movie in the franchise since the original Iron Man. That's not to say there aren't huge connections between Guardians and the rest of the MCU, and the film does a lot to inform some of the franchise's more otherworldly elements.

The story involves a powerful orb sought by the cosmic warlord Ronan (Lee Pace), and how the Guardians come together to stop him.

There’s definitely a “Star Wars” vibe about this one, with a 21st century Han Solo and Chewbacca in the form of Rocket and Groot (the aforementioned talking raccoon and humanoid tree, voiced by Bradley Cooper and Vin Diesel), and a hero, Peter Quill aka Star-Lord (Chris Pratt), who’s a cross between Luke Skywalker and Indiana Jones. Not to be overlooked are the beautiful assassin Gamora (Zoe Saldana) and the muscle-bound warrior Drax, played by pro-wrestler Dave Bautista.

The story zips from one visual effects spotlight to another, with some decent but not overwhelming 3D effects that aren't as eye-popping as one might expect. The real value of the 3D version is seeing some scenes expanded to fill the screen as they did in Imax theaters, whereas the 2D version is presented in a consistent widescreen ratio.

One of the best extras on the Blu-ray is a solo commentary with director Gunn, who not only slings stories about the production and sings the praises of his cast and crew, but also delves into a lot of the unknown backstory of the characters and planets in the film, and reveals some hidden details for viewers to look for.

For more behind-the-scenes info, fans can check out "Guide to the Galaxy With James Gunn," a pretty good 20-minute featurette highlighted by a video game version of the movie in which Gunn himself tries to get involved in the story. Another featurette focuses on the visual effects, primarily the creation of Groot and Rocket.

There’s also four minutes of amusing deleted scenes with optional commentary by Gunn, as well as a four-minute gag reel. The best part of the latter is seeing Ronan actually engage in Star-Lord's climactic dance-off challenge.

Finally, the Blu-ray includes a tame two-minute preview for next year's Avengers: Age of Ultron, which is pretty much standard-issue hype without adding much that isn't already known.